We published an article before – We Are Reaching an Age Where Computing is Defined by Software. Basic thing is that, in an ideal world, there is no need of any specialized hardware, which first to be installed by a consultant and then programmed in a specialized language; just have an application which can be define all the resources those are needed for a service, Software Defined Datacenter is actually just a piece of that way of thought. We already know about server virtualization and storage virtualization, and more recently software defined network (SDN), network virtualization. We will be gradually accustomed to the notion of software defined datacenter (SDDC). An infrastructure where all services are available upon request through automated and simplified management. 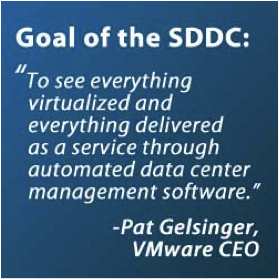 The base of the vCloud Suite is an updated version of the virtualization platform vSphere 5.1. The performance of virtual machines (VMs) has been expanded and the network capability has attained a robust design, making the unplanned downtime towards nill. It supports up to 64 virtual CPUs, they can run continuously, vMotion has been enhanced so that VMs can now migrate without shared storage in real time.

You can read it here :

Apart from this blog, VMware has more informative article on Software Defined Datacenter :