Four Thirds Standard in DSLR is a matched standard for lens mounts. It was present from the beginning regardless of lenses, cameras or sensor sizes. This allowed to solve compatibility issues with legacy components and the compromises in the design of new components. The first such camera with Four Thirds Standard, was the Olympus E-1, which was introduced in 2003. The standard of Four Thirds Standard defines, among other things; the sensor dimension, the lens mount including the protocol, the imaging circle, the flange focal length (38.85 mm), optical requirements such as the maximum angle between incident rays on the sensor.

The name Four Thirds Standard derives from the standard for external dimensions of the sensor (not the actual size), defined according to the traditional methods used in nominal size of image sensors based on the size of the corresponding imaging tube, specified as the diameter of the corresponding one unit of element in inches. When a Four Thirds image sensor is mentioned, the image size is therefore is four-thirds inch can on the photosensitive surface with the outer diameter. Typically, the diameter of the usable area is about two-thirds of the outer diameter.

Due to an open licensing policy, it is up to each manufacturer to create the respective accessories for the standard system on the market. Compatible components from different manufacturers can be used together.

Lenses for Four Thirds standard have essentially the bayonet system for mounting. Furthermore, there are limits for the fanning out of the light beam emerging from the lens – this should be as parallel as possible to the digital image sensor – their full sensitivity is only when the incident light falls perpendicularly. The standard required in the image circle is in proportion to the sensor size and is relatively large in order to achieve an uniform illumination of the sensor. These requirements seem especially right for the wide angle lenses and full aperture points towards vignetting of the image. As with most of the digital cameras, the sensor size is different from the dimensions of the 35-mm camera film from serving as a reference because of its enormous popularity, once. Due to its smaller size, results in respect of framing causes an apparent doubling of the focal length. 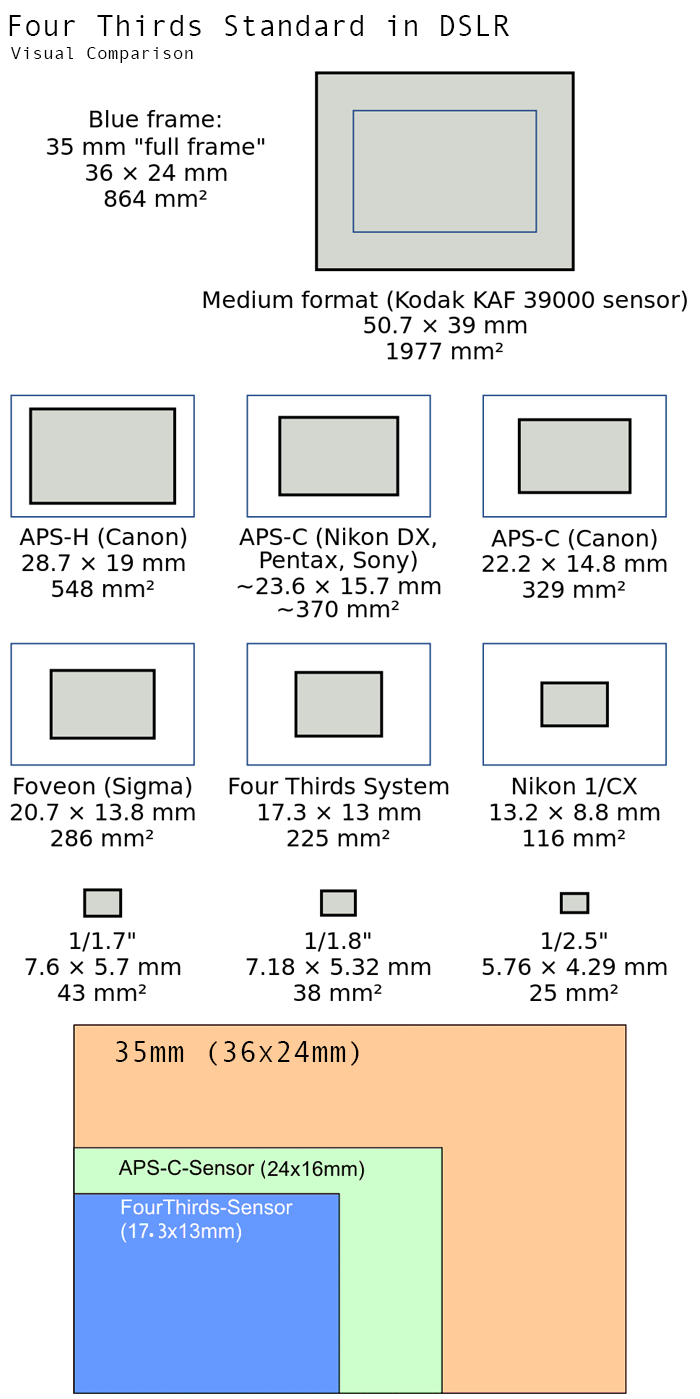 The depth of field of a Four Thirds lens on a Four-Thirds sensor is about twice as large as for sensors with small size with the same f-number and the same perspective for taking the same image. A Four Thirds lens is so sharp even at f2.0 the area from which emerges a small picture-sharp until f4.0

Among the SLR Four Thirds sensor is currently the smallest in dimension. The competing DSLRs with APS-C sensors have sensors about 56 percent bigger against Canon EF-S and 78 percent against Nikon DX, Pentax, Sony DT. Sensors in the 35-mm film format does have about 4 times the size than the Four Thirds standard.