In an previous article, we wrote about the technical points of a typical Compact Digital Camera in very simple language, in this post we will discuss about Digital single-lens reflex camera or popularly known as DSLR Camera.

The technology behind a typical DSLR

Basically the technology of DSLR is of Reflex Lens Camera. There are two types of Reflex Lens Camera and Twin Reflex Lens Camera. Twin Reflex Lens Camera are those you can recall as kept in museum – big box with two lenses in front. So, the practical use is only of single lens reflex camera – SLR. The digital spouse of Film SLR is now DSLR. This is said, but there are many difference with a DSLR and a Film SLR, making the extra accessories of a Film SLR, like the lens almost unusable with a DSLR (except few Lens models). In DSLR camera in between the Lens and the Sensor a mirror is placed from which the actually taken image through optical viewfinder can be checked. Since the optical system produces the image in viewfinder through the optical system for shooting is consistent with the image to be actually taken, a DSLR actually shows what the photographer is going to shoot. 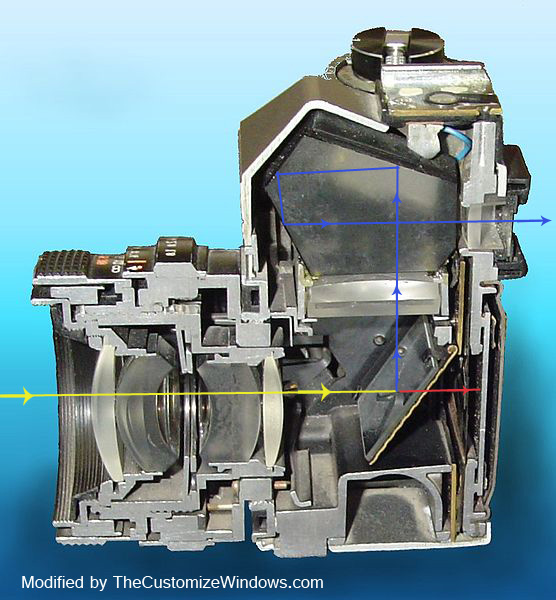 The above modified photograph of the cut section of a old SLR (not DSLR, but the thing is almost the same) shows the basic principle of a DSLR. Keep in mind, I have used lines to indicate the light. But as you know, light is always a packet not a line. So, actually it is an ideal hypothetical model – we are taking there is no diffraction of light. In this model, the yellow line is the light of image to be taken, if the shutter is not pressed, the mirror reflects it and the image is viewable through the viewfinder (blue line). If the shutter is pressed, the mirror goes up like a door to give the chance to the light (red line) to get captured by film in film SLR or sensor in DSLR.

If you notice the glass thing near the viewfinder, you will understand it is a solid glass. This is the pentaprism of a SLR or DSLR. This is a cut section of a modern DSLR : 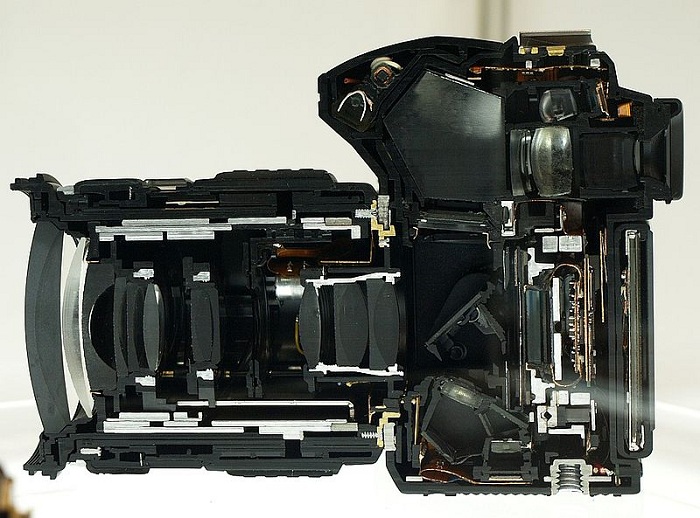 As you can notice there are more complicated parts are added in a DSLR.

Advantages and Disadvantages of a DSLR

As it is not a physics class, we will go straightforwardly to the advantages and disadvantages of a DSLR.

Clear cut advantages of a DSLR :

Clear cut disadvantages of a DSLR :

A DSLR is not a camera for all. Not even a DSLR makes to take ‘better images’ without knowing about photography. A DSLR is an advanced camera for those who needs or loves photography.

This Article Has Been Shared 399 Times!