The primary goal of Virtualization is to provide the user with an abstraction layer from the actual hardware isolated – computing power and storage space. A logical layer is introduced between the user and resource in order to hide the physical characteristics of the hardware. It is each user is shown that he is the sole user of a resource is / are joined to several (heterogeneous) hardware resources into a homogeneous environment. The user of the invisible, transparent management of the resource is usually the job of the operating system.

Virtualization software can be used for several purposes, eg to simulate an operating system or just an application. Classification of approaches to virtualization to create virtual environments in the overall context of virtualization. More on Virtualization Software.

Approach of a virtual machine monitor (VMM) to create virtual operating environments : With virtualization using a virtual machine monitor (hypervisor), the waiting native (= real physically available) system is distributed intelligently. This can be done by hardware emulation, hardware virtualization or paravirtualization. Each guest systems in each case has its own complete computer with all the hardware components ( processor , disk drives , memory , etc.) made ??up a system. The advantage is that in the operating systems themselves (almost) no changes are necessary and the guest operating systems all have their own kernel, which entails a degree of flexibility.

The virtual machine simulates the complete hardware and allows an unmodified operating system that is designed for a different CPU, operation.

Examples: Bochs (in this simulation instead of emulation), PPC version of Microsoft Virtual PC , QEMU .

The virtual machine guest operating system provides the only parts of the physical hardware in the form of virtual hardware. This is sufficient, however, to run an unmodified operating system on it in an isolated environment. The host system must be on the same CPU type to be designed. 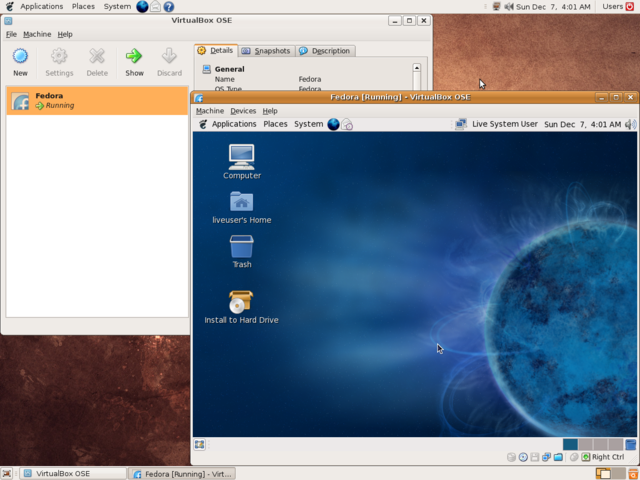 In case of Hardware Virtualization, either the whole system (partitioning with LPAR , Domaining) or individual components such as CPU ( Intel’s Vanderpool or AMD’s Pacifica ) are virtualized.

When the system or operating system virtualization, the virtual machine monitor received commands from host systems (virtual machines) to be executed on the native hardware. Before the introduction of processor virtualization had to be modified in certain (possibly safety-critical) instructions, which were from the host system via the Virtual Machine Monitor sent to the hardware.

Through virtualization, the processor from AMD and Intel can usecommands without modifying the virtual machine monitor to be sent directly to the processor. The processor takes care of itself for the distinction between the guest system processes and VMM processes. By eliminating the modifications of the VMM, a higher performance is achieved.