Advertisement
You are here: Home » Anycast : What is Anycast and Practical Usages
Advertisement

Anycast is an addressing mode in computer networks, where you can connect to a single computer from an an entire group of computers. It answers to the one who has the shortest route. Anycast is realized by a distribution of several similar servers on physically separate IP networks.

In practice, anycast is often installed on every continent and in every country in a region on at least on one server. Each computer also receives the same IP address and propagates the corresponding route via a routing protocol. In case of failure or unavailability, the route will disappear and all subsequent packets are routed to another server. The desired service through anycast can thus be performed even if one or more servers. Thus anycat increases the availability. Anycast servers have in most cases, has a unicast address.

From the perspective of a client between unicast and anycast has no difference. The client sends an IP packet to a “normal” IP address and receives answer. Which server is addressed solely determines the routing. For unstable routing, successive IP packets are routed to different servers. Thus, for anycast preferably UDP like connectionless protocols are used. In stable environments TCP can be used with anycast. 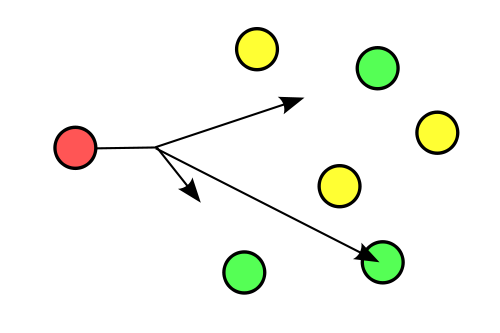 Main advantages of anycast are used in load balancing for shorter access times. There are also a nearly complete transparency (the user does not notice that it is communicating with an anycast server) as well as excellent scalability (it can always be added or removed server). Since all the servers involved must always provide the same data, the internal synchronization is expensive. Moreover, in case of fault, the fault diagnosis is difficult because often not obvious without further analysis that which server is responsible.

Anycast, for example, used in some of the root name servers and top-level domain servers as well as in the IPv6 -in- IPv4 tunneling mechanism.

Articles Related to Anycast : What is Anycast and Practical Usages