Advertisement
You are here: Home » System on a Chip (SOC) : A Brief Details
Advertisement

System on a Chip or SOC refers to the integration of all or a larger functional part of a system on one chip. SoC consists of a processor, memory and peripherals. System on a Chip is a combination of different elements including logic circuits, timers, independent start up controls, etc.; System on a Chip provide a certain functionality, such as an sensing acceleration. SoCs are typically used in embedded systems.

Brief Technical Details of System on a Chip (SOC)

The primary advantages of System on a Chip (SOC) are cost savings, reduced energy consumption and comprehensive miniaturization. For example in mobile telephones, digital functions, optionally with the exception of the external  memory, are on an IC. The interface to the keyboard, for example, SIM card or the display are included in this IC.

A similar technique to achieve high integration of component parts of very different technique, is called system-in-Package (SiP). Here, several chips are combined in one housing.

Application and Usages of System on a Chip (SOC)

System on a Chip (SOC) are primarily used in mobile communications for embedded computers, handhelds, smart phones, PDAs, MP3 players, CD and DVD devices and anywhere where need comes to smaller size with high performance and versatile functions, for example, in medical or analytical chemistry and in the air and space travel. It is normal that System on a Chip (SOC) enabled devices can also have option to connect remote units, such as a keyboard or monitor.

Components of System on a Chip (SOC) 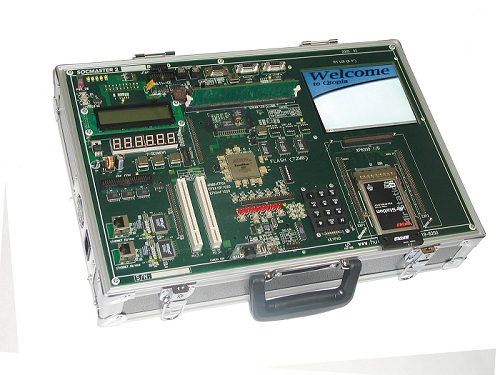 Here are the major components of a typical System on a Chip (SOC) :

Bus : System on a Chip is connected internally via one or more buses. In more complex System on a Chip often has hierarchical or at least segmented bus system. This typically consists of a fast system bus, a slower peripheral bus and a register and controller bus.

Processor :  Typically, a System on a Chip consists of a processor, which via a bus connected with memory and other peripherals. This processor can be either a very simple 8-bit microcontroller to very powerful multi-core CPU.

Graphics : Many System on a Chip also include a graphical core, which is used to control one or multiple displays.

Audio :  These are needed for System on a Chip of mobile phones, MP3, DVD players and similar multimedia devices.

This Article Has Been Shared 674 Times!

Articles Related to System on a Chip (SOC) : A Brief Details