DNA Computing is the application where replicated organic compounds like DNA, RNA are used instead of traditional inorganic chips for parallel computing. Richard Feynman the founder of nanotechnology, in a lecture at the end of the 1950 delivered the idea of data processing with biological molecules. Just like Cloud Computing it was realized later, in 1994 by Leonard Adleman. Officially Leonard Adleman is the father of DNA Computing.

DNA Computing and Modeling of Neurons

There is no difference in any field of logical applied knowledge. One example – you can not understand the last chapter of any language’s Grammar if you, for example have no idea about noun and verb. The knowledges are logically set to make a human with an arbitrarily taken medium intelligence (Intelligence has no measurable unit) to understand and apply it later. Science, Arts – these arbitrary difference is made for one big reason – we need skilled labors. Its like Ant Colony Optimization theory.

NEURON is basically simulation of real neurons in programming language, like doing a reverse engineering. Just like a PHP scripting we can define and simulate the work of a neuron :

Ultimately, if we execute it, it will produce a graph like a normal neuron will produce. There are lot resemblance with cURL like in creating objects. Basically we will do the reverse in case of DNA Computing. If you logically thing, in DNA Computing we will use the processing power (better to be said computing power or compute cycles) to execute programs. 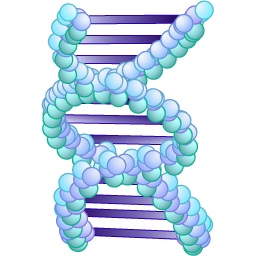 The organization and complexity of all living things is based on a code with four different bases in the DNA molecule. Thereby, the DNA is a medium, which is perfectly suited for the data processing. According to various calculations, a DNA computer with a liquid volume of one liter and containing six grams DNA has a theoretical capacity of 3072 Exabyte. The theoretical maximum speed is because of the massive parallelism of the calculations. Every second there are about 1 million tera-operations, while the most powerful computers today just reach one tera-operation per second.

Leonard Adleman in 1994 with his TT-100, the first prototype of a DNA Computing model, in the form of a test tube with 100 microliters of DNA solution established DNA Computing. With the help of this device, he was able to solve simple mathematical problems.

DNA Computing differs from traditional computing – in memory and in parallel operation. The realization of theDNA Computing mainly has technical problems and problem of number of active research works. The goal of current DNA Computing research is to provide a hybrid system which will work with electronic components, just like in Cloud Computing.

As grandfather of DNA computing was Richard Feynman, the founder of nanotechnology, its obvious that another field has developed –  DNA nanotechnology.

Articles Related to DNA Computing and Modeling of Neurons