Advertisement
You are here: Home » Computer Keyboard : The Science and Art At Your Finger Tips
Advertisement

How a Computer Keyboard Works ?

Basically every single button of a Computer Keyboard, connect directly to the keyboard controller, which also require a large number of ports on the controller and appropriate wiring. The individual keys are in an electrical matrix arranged in row and columns. When a button is pressed, a particular row with a specific column is electrically connected. This compound electrical mechnism is a evaluated by a microcontroller and it sends this information to the computer, in the currently dominant IBM PC architecture and in Apple Macintosh – it is key code or scan code. Thus, for example be realized with a 16 x 8 matrix with 24 lines up to 128 keys.

This operating principle is almost universally applicable to all modern input devices with multiple buttons. Some older architectures, the main processor itself took over the keyboard query, for example, when Commodore PET 2001 , Commodore 64 , Atari 800 and Sharp MZ-700.

The Computer Keyboard matrix consists of 13 columns and 8 rows (104 keys). First, the output for the first column is activated and then it checks whether it is at one or more of the eight inputs of the rows and again finds this low voltage. Then the output of the first column is deactivated and activated for the second column, and so on. This process is repeated continuously for at least a few dozen times per second and is called “scanning”. From the coordinate within the column and row matrix of the keyboard, the processor of the keyboard determines a key number, which is then converted and is transmitted to the computer. It does not matter which Computer Keyboard layout is used, the scan code only indicates the position of the key pressed for a standard Computer Keyboard, regardless of the external device, the language of the operating system or the labeling of the keys.

Differences of Layout in Computer Keyboard 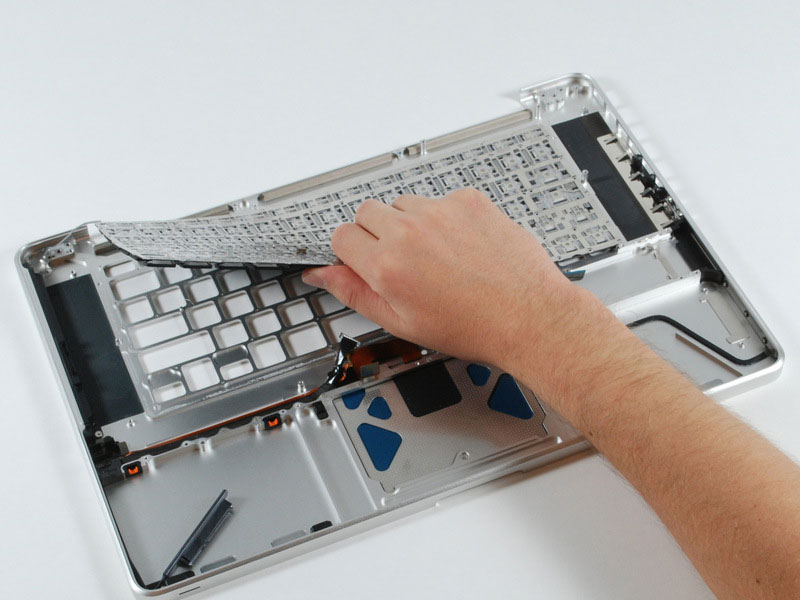 Image is taken from http://appleinsider.com/articles/08/10/16/apples_new_macbook_and_macbook_pro_torn_down_photos

Although the keyboards for IBM PCs follow a uniform standard, have 25 years in PC history through extensions and local adaptations, many different types of keyboards can be found for the PC segment. Apple keyboards are a bit different from the PC keyboards and is minimal. Extended Apple keyboard has 19 function keys. In addition, there is a button for ejecting optical media except where the optical drive is not integrated. The Command (?) is special add on and the Scroll Lock key, the Pause button, the Insert key as well as the Windows key or Super Key is not present on an Apple keyboard.

Mechanics and External Artistic part of a Computer Keyboard

Some of the traditional keyboards have a coil spring for the return and a lead that prevent jamming of the key. Keys that occupy more than one grid space have additional brackets that support a position for compensation from jamming. Some notebook keyboards, such as from HP / Compaq, Acer has scissor-like guides that fold upon depression. Robust keyboards have a leaf spring mechanism, having a pressure point, which requires a certain minimum force to overcome the signal. So the user is given a tactile feedback. A classic example of such a keyboard with these characteristics is the IBM Model M. All Apple keyboard has tactile feedback and vibration feedback for erroneous input.

This is the basic mechanism of how a keyboard is made. From manufacturer to manufacturer, the quality and features varies. For Keyboard of MacBook Pro Series, there is sensor assisted backlight, laser etched key prints, integrated LED on the caps lock key etc.

On the PC keyboards, there can be extra multimedia shortcut buttons, cut, copy, paste buttons etc.

Articles Related to Computer Keyboard : The Science and Art At Your Finger Tips