Dell Cloud Computing and Server Hardware are both present and future aspects of the brand. Dell is third in x86 server sales, behind IBM and HP. So, the all three bigger brands of Server Hardware – IBM, HP and Dell; although are the market leaders of the server hardware market are quite seriously interested in Cloud Computing with their own models. IBM practically has withdrawn their interest from consumer computer products, while HP and Dell usually employ third parties to assemble the parts for consumer grade computers. But the crap quality build of HP and Dell in consumer computer market is not even close to the quality of Servers. On the more costly higher computing products, IBM, HP and other less heard brands by the consumers rules. So Dell basically has a good market on x86 server, but Dell Cloud Computing is an interesting part for their and others’ business.

Dell Cloud Computing and Server Hardware : Looking Back to 2012

The company has the third highest number of servers purchased by its customers during 2012, IBM remains strong in the mainframe and other high-end hardware, HP remains very strong in the server segment, while Dell shows its muscles in the field of X86, which is currently the most common server to internal data center and thereby Private Cloud Setup. 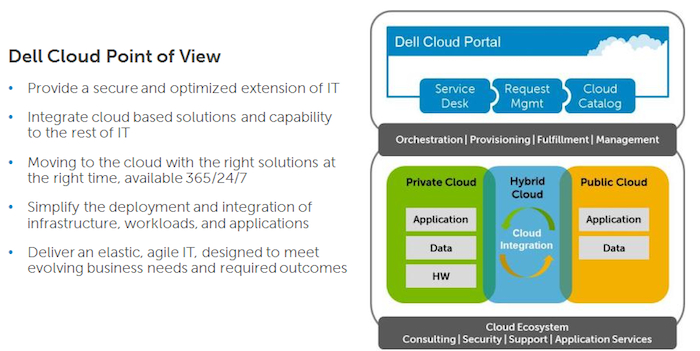 Michael Dell, the founder of the company, stressed the importance of the strategy chosen by Dell Cloud Computing and Dell as a whole, during Dell World Event in Austin, Texas. There are 64,000 servers installed Dell branded servers to ensure that this brand will become the leading market share in the server world, but even so the numbers do not make the sense well. The world is changing fast and that is what is pointed by Michael, that selling cloud computing solutions as ready-made solution, with OpenStack, the well-known open source cloud computing platform that not only has the support of the company, but is part of various proposals for the creation of private cloud computing solutions; can again change the view of Web hosting market.

This Article Has Been Shared 289 Times!