Semantic Web not only brought with RDF, in conjunction OWL, RDF, SPARQL, GRDDL, RDFa, RIF, GeneOntology (GO) and Medical Subject Headings (MeSH) are in use. In the previous article on How Semantic Web Works, we described the basics; in this article we will go through a brief overview of each way of implementation.

The International standard of Semantic Web is defined by W3C :

Techniques of the Semantic Web are slowly and partially progressing. Examples projects are:

There are various implementations including in Agricultural robotics, Precision agriculture, In software production or development of Body implants and Artificial Prosthesis, Tissue engineering, Interferometric modulator display, Flexible electronics (Flexible electronics is which you have read of about Apple’s patent for a flexible phone, usually written by those $10.00 per post writers in so called popular news website) to list only some.

In 2001, Berners-Lee et al. wrote in an article about the Semantic Web as an extension of the conventional Web, the information will be provided with unique meanings to facilitate the work between man and machine (“The Semantic Web is an extension of the current web in Which information is Represted well -with defined meaning, better enabling of computers and people to work in cooperation “, (2001-05)). 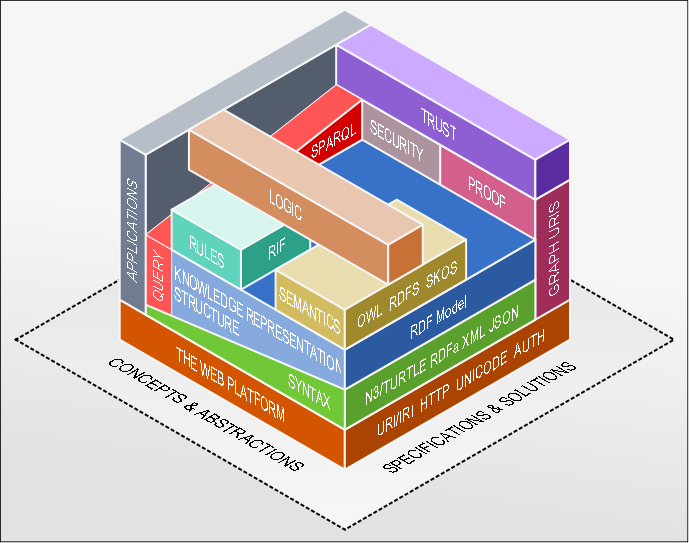 Image : Too many sources are indirectly claiming they have created it.
We found no one; unless otherwise proved, you can use under GNU GPL 3.0 License.

RDF as a markup language for metadata is based on so-called triples or statements from a subject, predicate and object, which can be seen as an extension to key-value pairs. While key-value pairs can only assign any property to any value it can work with a kind of semantic triples on an object, concept or value which can be set in relationship with another. Any resources (web pages typically) is assigned with specific values, such as author, creation date, and specific URL of the site and the subject, the predicate and finally the author’s name represents the property – ‘author’ in the object. Since ideally for the known properties widely used vocabulary is/are used, such as the Dublin Core Element Set (DC), the unique URIs provides the main types of metadata, the information of such an excellent resource for computer programs as metadata are identifiable and accordingly interpreted, e.g. as just such an author.

But the concept of conceptual graphs proved to be too little too formal and imprecise. The optimal serializing of RDF-based descriptions is not a trivial problem, so that for a simpler notations they are continually being researched and on the other hand a wide distribution does not take place in a day. This difficulty is also hand in hand with a lack of immediate “reward value” which the troubles versus metadata.

Using the Resource Description Framework model gives the possibility to use a single XML to generate compliant documents that describe objects using statements. By judicious choice of the resource name to get the information about the object. A group of similar objects, such as books, all with the same characteristics distinguishably offers easy way to search, RDF is a “framework” for all of these objects to be defined. For these purposes, the RDF description language was – RDF Schema (RDFS : RDF Vocabulary Description Language). This provides the ability to set terms and their related properties semantically to each other. For example, RDFS can set the property, title to describe the title of a book. RDF Schema is defined for each attribute, this has a significance – which relations to other properties exist and what types of resources may not in use can be defined by this property.

In recent years, RDF Schema communities have formed that have the task of designing RDF Schema metadata models, such as the Dublin Core . Through this decentralized approach it is admitted that, it is impossible to develop a single scheme that would be suitable for all use options.

The Web Ontology Language (OWL) is currently the most popular language for modeling ontologies and thus has more to do with the development of the Semantic Web. The official exchange syntax is RDF. OWL is located on the Semantic Web concept above XML. With OWL, just like with RDFS terms of a domain and their relationships formally described.

However, compared to RDFS, OWL offers more complex functions to describe the relationships. In general, the difference between OWL and RDFS is that the concepts can be specified more clearly in OWL, which creates a higher level of abstraction in Semantic Web. The Web Ontology Language exists in three different versions.

Tagged With brief overview of semantic , OVERVIEW OF SEMANTIC WEB