Advertisement
You are here: Home » Virtualization : Essential To Know Before Moving to Cloud Computing
Advertisement

If there was no need of knowing about Virtualization, we would not have a separate section on Virtualization. Some articles like this one can be classified in to both the categories. There would be no need to know about the Security Risks of Virtualization in Data Center. VMware has published some data about and surprisingly there is still a high percentage of companies who either do not use virtualization in the enterprise setup or is not aware that virtualization exists. The future looks promising numbers in growth, VMware estimates that in 2014, 80% of the companies will have to deal with virtual infrastructures.

Virtualization : Essential To Know Before Moving to Cloud Computing 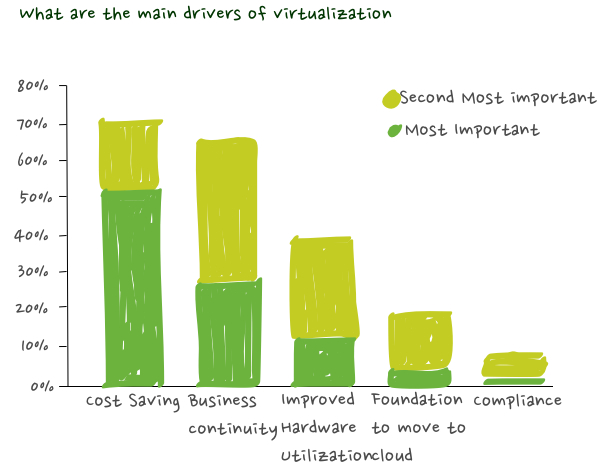 It is unthinkable to adopt cloud computing solutions without having virtualization deployed, at least for basic IT services, this, as you can see from the graph, has become an additional driver to convince companies to virtualize their servers. VMware, which has conducted research with its channel partners, has also made it clear that virtualization does not seem to always be so easy adoptable within the company, among the factors that hinder there is also a lack of information that stops the answers of the respondents.

Most fear the start-up costs of the transition to virtualization is high. But the fact is, deploying virtualization is an investment to get long term benefit. For VMware, obviously this is a very important part of the success of cloud computing in the enterprise is mainly due to the passing of the adoption of virtualization technology for years but still this fact not has not been perceived by everyone in the enterprise. Virtualization is obviously essential part for moving to the cloud: it is unthinkable to install private cloud services in the enterprise without having any virtualized machine from the technical point of view, the difficulty to go from totally physical infrastructure to infrastructure cloud, is a matter of mindset and approach : it is unthinkable to provide staff with business, IT and non-cloud tools when they have not yet approached towards a gradual transition to virtualization.

Articles Related to Virtualization : Essential To Know Before Moving to Cloud Computing