Advertisement
You are here: Home » Entrepreneur : Meaning and Characteristics
Advertisement

Entrepreneur is a person who has the skill of overcoming resistance, incorporate innovations and channelize to money. Entrepreneurs has some common characteristics. The biggest, weired and practical example of Entrepreneur is the person who is writing this – me. I ‘normally’ should remain within medical science, indeed Orthopedic Surgery is quite high earning itself; but it is not possible for me to think that I am doing only a work like a slave set by the society. It s not really possible to explain why I started to do funding with professional technology blogging (I should write health blogs!), turned towards business, invented many things and took patent, now waiting to exploit the market – it is really difficult to explain why I like to earn from IT consultation, read books on MySQL, do coding! People will take that I do not like surgery. It is fully wrong – indeed, I love Health and Surgery more than an average doctor. So I know the basics of SEO, Blogging, Economics, WSO to Cognitive Neuroscience. There were many people from health, usually my batchmates who initially tried made me fearful while I started technology blogs – they claimed that I will forget things about health. Practically reverse happened. Entrepreneur is a term derived from the French word Entrepreneur and is commonly used to describe an individual who organizes and operates a business or businesses, taking financial risk. As you can understand, practically it is difficult to have a standard definition of the word Entrepreneur. The usage is of 200 years old, nowadays getting more focus. It is really possible to make an Entrepreneur, hardly a Businessman can be manufactured by the traditional teaching.

Perception of an Entrepreneur and Country Based Acceptance

Most countries also has special Business rules, methods of funding for the Entrepreneurs. Basically, it is business that makes a country’s economy better, freelancing is more acceptable old way versus dependent fixed job. But the fallacy are many, almost all the Countries list the Businessmen who has a huge earning. Thomas Alva Edison is an Entrepreneur, because he really innovated things and made money out of it. Vijay Mallya, Ratan Tata are Indian industrialists, they are listed as Entrepreneurs but basically they continued their family business, nothing more.

On the other hand, a typical well educated Film Star can be said is an Entrepreneur. Preity Zinta could be happy with her degrees and do a job, but she became an actress, then a director, then a business women and possibly will change her business later again. A SEO Expert, good earning blogger is also falls in the category of Entrepreneur. Jeremy Shoemaker, Darren Rowse SHOULD do what they had the degrees or education, but they just proved the fact – degrees has no value.

How to Become an Entrepreneur

There is no way to “Become Entrepreneur”. They are lot of legit courses that can give you the right to use the label “Entrepreneur” but by any means, none can teach you how to become a Darren Rowse. You can become a businessman, an Industrialist. Darren Rowse, Bryan Gardner are simply and naturally Entrepreneurs, they never ran behind to get the badge of the word.

How you will become another Darren Rowser to become an Entrepreneur  ? Again, that is violating the definition – the thought is borrowed from Darren, nothing innovative or unique. Richard Stallman is practically the Guru of many Entrepreneurs. 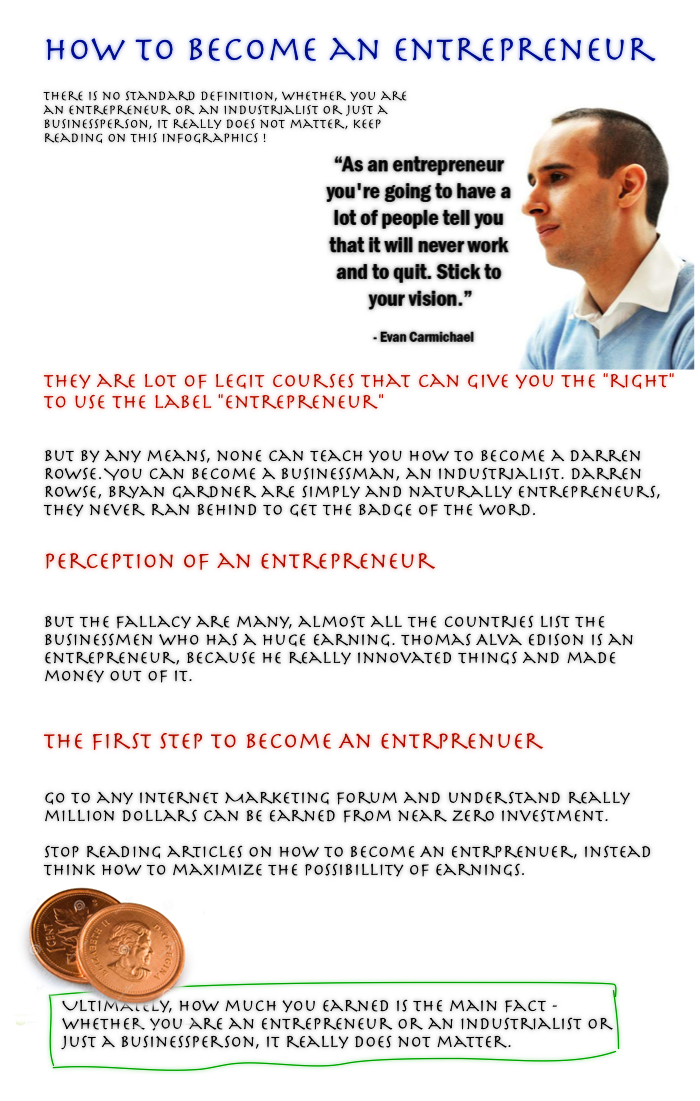 My suggestion will be, try not to Become Entrepreneur. Try to earn more by exploiting the chances of earnings. Simply try to become an Industrialist or a businessperson. It is not really possible to do in the way Thomas Alva Edison followed. Obviously ! use the fundings offered by Governments under the hood of the label “Entrepreneur” to increase your earnings after, for example you have started to earn a stable $2000 / month from online works -practically, today this is the only way for kick starting earnings with zero investment. Grow as you go, when people will start to say that you are earning in bizarre way, you’ll understand that, you’ve became an Entrepreneur. Then you’ll take loans, arrange funding for more online growth, then slowly will take risks. Ultimately, how much you earned is the main fact – whether you are an Entrepreneur or an Industrialist or just a Businessperson, it really does not matter. A spiritual Guru can be an Entrepreneur.