Tar Extract Progress Bar is of particular importance while working from SSH. However, there are various solutions for your need and wish. The word, tar is derived from “tape archive”. Tar is both a file format and the name of a program used to process such files. Tar format was created in the early days of UNIX and standardized by POSIX in 1988 again in 2001. Initially tar was developed to write data to tape backup, tar is now commonly used to collect many files into one larger file.

Tar Extract Progress Bar in Linux and OS X : Something About Standard Streams

Actually, standard streams are pre connected input and output channels between a computer program and typically a text terminal. Terminal can be quite confusing to many users as there was Physical Terminal in computing before and now we use Terminal named Apps – reading about Terminal here will clear the topic forever. The three I/O connections are called standard input (stdin), standard output (stdout) and standard error (stderr). Obviously as you are using SSD now,but  tar was used on UNIX with real terminal for tape devices, the program is not compiled to give a basic pipe output – that is what is your basic Tar Extract Progress Bar like wget has.

A tarpipe is the process of creating a tar archive on stdout and piping the archive byte stream to another tar process, working in another directory, and unpacking the archive received on stdin. This copies the entire source directory tree including all special files, such as symlinks or character or block device files. For example:

What we wanted to say is – actually the Extract Progress Bar can be evoked, it is not that Tar has no such function. The pipe ( This => | ) has an associated program named Pipe Viewer ( pv ). A very basic usage can be :

It will offer you a great command line output with progress bar [===> ] with many details. But pv itself needed to be installed :

pv dialog is another package which has a kind of colorful interface. You can view the filenames as they are being processed by tar with the -v flag, in case you do not want to install pv. 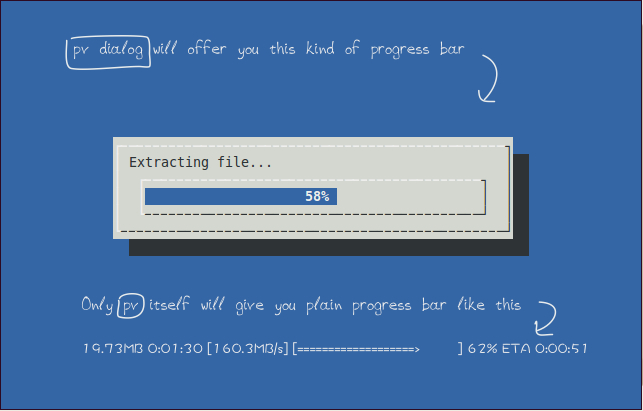 With pv, the command is becoming :