OpenShift OctoPress Auto install Script is an Advanced Script to Run OctoPress on Free OpenShift PaaS Practically Without Any Knowing Ruby or Git. Practically, I have not thought it will become so much easy! Running OpenShift OctoPress Auto install Script on the localhost does everything. It is more easy than installing WordPress by a newbie. If you use it once, you’ll never type commands again. I could made it more automated, that will have problem with forward and backward compatibility with the rhc client. Plus for Free Tier of RedHat OpenShift, you might not have an empty cartridge. If you uncomment the lines, it will becomes 100% automated.

OS X or any GNU/Linux or any unixoid OS. You will need an RedHat OpenShift Account with an empty cartridge. Most important is having the rhc client installed. It will not work without rhc client.

I have the GitHub Repo of OpenShift OctoPress Auto install Script here. You can wget the shiftocto.sh script, chmod it to execute it.

Copy only the Git remote URL. In our case, it is :

On the other Terminal Window run :

Humm. This Script Will Install OctoPress on OpenShift. Hit Y or N

Hit the y key on keyboard. There is an instruction, it will give you :

Read the instruction? Y will proceed, N will Quit

Everything actually said on the previous steps, still read it. Hit the y key on keyboard. It will ask :

Copy Paste the git URL from the Git remote URL from OpenShift Panel for octopress App which looks like:

Paste the Git remote url from the other Terminal Windows (rhc client’s output). Hit the Return / Enter key after pasting it. Your work is to watch if any password prompt or yes/no prompt appears. It will prepare both the local computer and remote computer (OpenShift) ready with studded gems.

A Hello World post will be created. You’ll point your browser to the URL from the other Terminal Window, which will look like http://octopress-abhishekghosh.rhcloud.com/, you’ll see that everything is ready. I do not know what is your name, so default name is Your Name. 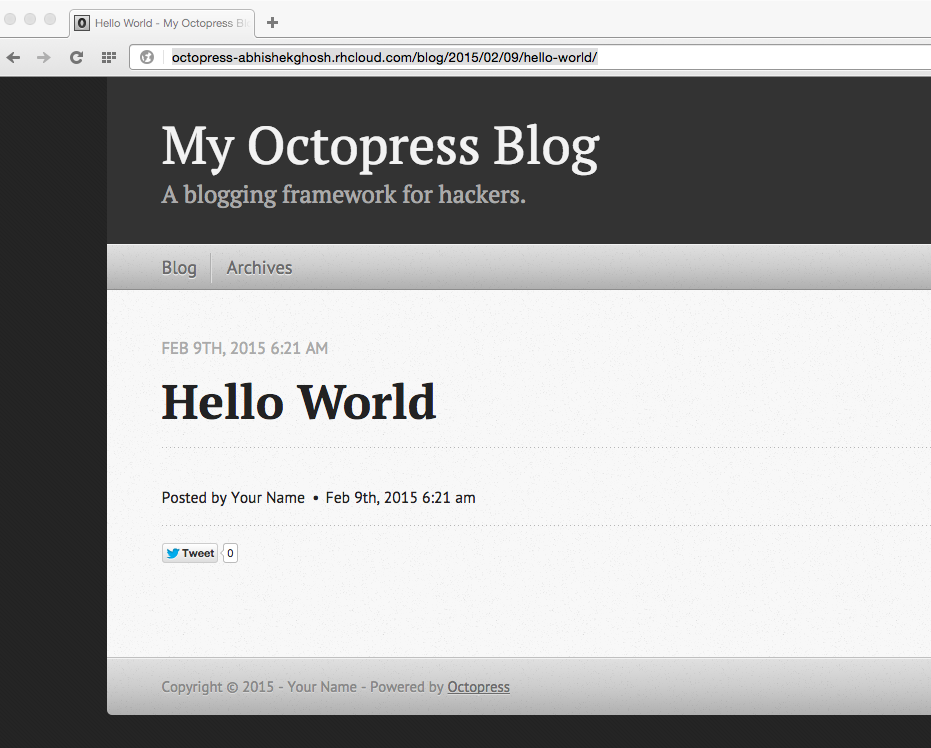 The structure of octopress generated from our script need looks like this :

It is complicated but entire pushing the entire octopress directory to Openshift is not needed, we need to push the output only.

Editing that _config.yml will work fine and when you will post for the first time manually :

It will work fine. Obviously, you’ll not do rm -rf _deployment/public/* every time. This OctoPress have a huge documentation, you will not have problem.

Also, the backup is remaining in your directory of localhost. You are pushing the _deployment only. The default post which we can see is :

Default repo. The full script is this, the found the Gemfile somewhere in GitHub, you may need your own thing. If you look at the main steps, you’ll understand the philosophy, this the bare script, only notice, which is copied, moved etc. :

Your local computer will work for generating the static files. You need not to push the whole thing to change your name and details. If the main files are changed, it will become a new Press, not OctoPress.