After Heartbleed and POODLE, FREAK jeopardizes the encryption of data in transit and simplifies the implementation of the attacks Man-in-the-middle Attack (MiTMA), allowing the interception of traffic between client and server and its decryption.This vulnerability has been discovered by Karthikeyan Bhargavan. The vulnerability is called FREAK, which is the acronym for Factoring attack on RSA-EXPORT Keys. A paper was recently published technical to explain what constitutes substantially the vulnerability and its analysis clearly emerge some peculiar aspects of this flaw. The first aspect concerns the operation and features.

If you want to open our website thecustomizewindows.com, before opening on browser, you should test with this command on Terminal or iTerm2 (or SSH window) with latest version of OpenSSL installed :

this means – it is safe website. If there is no output, it is vulnerable. We have added unix pipe and grep, to make it simple.

To automate the above method, we have a ready to use basic Shebang script on Github to test FREAK Attack. You’ll get instructions there, you can clone the git or wget the script : 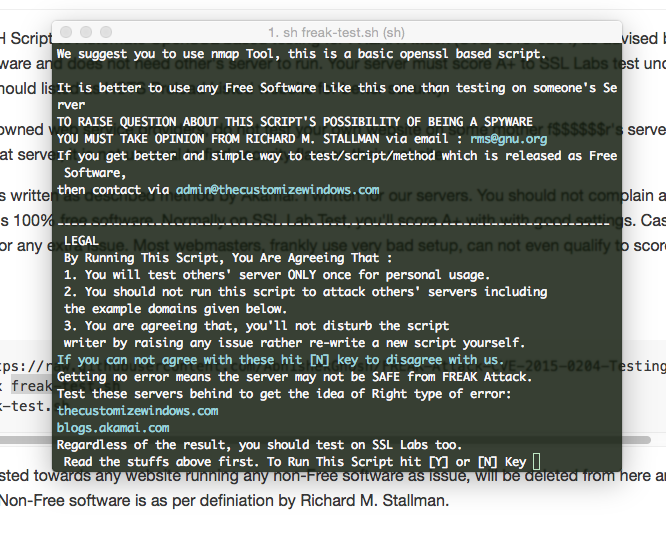 That SSL Labs Test is quite good, plus testing with this; should work fine for the Linux/ *nix Servers. You’ll get pre-tested vulnerable websites here :

FREAK is a flaw that allows to perpetrate an attack on SSL communications through a mechanism by which a hacker has the opportunity to force a server to accept a cryptographic key weaker than that normally used to allow a faster decryption of data in transit. The hacker can replace a Web site vulnerable and conduct Man-In-The-middle attacks against the user and its data in transit to the server.

The second aspect concerns its origin, which dates back to the ’90s, when the United States, for reasons of internal security, had outlawed the strongest encryption technologies an’ NSA had forced software vendors to integrate lower security levels, with cryptographic keys that were at the maximum amount equal to 512 bits (today’s standard encryption is 2048 bits RSA). Encryption that was enough for the time and still allow government agencies to have a way out if there had been the need to compromise the keys in a reasonable time for reasons of public safety. The level imposed by the NSA, which curiously is mentioned among the vulnerable sites, it was enough for the 90s, but it is currently possible for anyone to spend a hundred dollars on platforms like Amazon to have the computational power needed to crack a key so limited.

In fact, this ban was removed some time later, but some manufacturers (including Apple and Google) continued to keep faith commitment to a mere question of compatibility with services and software already in circulation. The third interesting aspect is the spread of the vulnerability. According to University of Michigan about a third of the sites protected by SSL technology / TLS are vulnerable to FREAK, including those of some banks such as American Express, those of e-commerce as Groupon and, curiously, those of some government agencies, as sites FBI, NSA and the White House.

The software that would be affected by the flaw should be all browsers, some components of the Google Android operating system and Apple (such as the internal webkit). Apple and Google have confirmed the bug : they first said to have a patch ready for release later next week, while Mountain View has already sent their bug fixes to various manufacturers and operators Android, which should definitely be cross checked by the others.

Finally, the Akamai CDN confirmed that it had already updated their systems. Again, FREAK highlights issues of no small importance – the removal or weakening of cryptographic protections is a fire which is not to be trifled with, because in the long run is not a decision that should governments should decide themselves;
SSL and its successor TLS need to have more controls and audits, which are not carried out because of lack of investment and the few financial resources intended to open source projects.

This Article Has Been Shared 467 Times!