There are certain commonly used commands for managing Linux Servers. Here are some useful grep, cut examples with unix pipelining for SSH. We wrote about UNIX Pipe before, the reader must read that article if he/she is not aware of using pipe. Theoretical knowledge and practical management of a server differs hugely. We often do not type cd followed by space on Mac iTerm2, Homebrew Setup. We simply type / and hit the return key. If I am at Desktop on iTerm, and there is a directory named old-master, I can omit cd and simply type old-master and hit the return key. In bash shell there is an autocd option. You can enable it by using shopt -s autocd. It actually works on Ubuntu server. If you type /etc/php5/fpm/ (if exists), you’ll get -bash: /etc/php5/fpm/: Is a directory as output on Ubuntu Server. After running shopt -s autocd command, you can type /etc/php5/fpm/ to change directory.  Let us comeback to our topic – grep, cut examples with unix pipe.

Basically, we should show examples of grep, then examples of cut and then use the unix pipeline. As usually, we can run man grep and man cut to learn the basics about the utilities. The official definition is – “The cut utility cuts out selected portions of each line from each file and writes them to the standard output. If no file arguments are specified, or a file argument is a single dash, cut reads from the standard input.” For example, if we run this command :

The command who would return output like this on my Mac :

When I am piping it via cut with arguments, I am getting this as output :

This’ll extract only a desired column from the text file with -c option and displays the 2nd character from Matt Cutts’ WordPress License :

It is quite bizarre output. You will get something like :

It will return a funny text with lines containing “General”. This is important as this command :

returns a huge output, but we need to check whether the website is HSTS Preloaded or not. So, we can simple grep “Strict” : 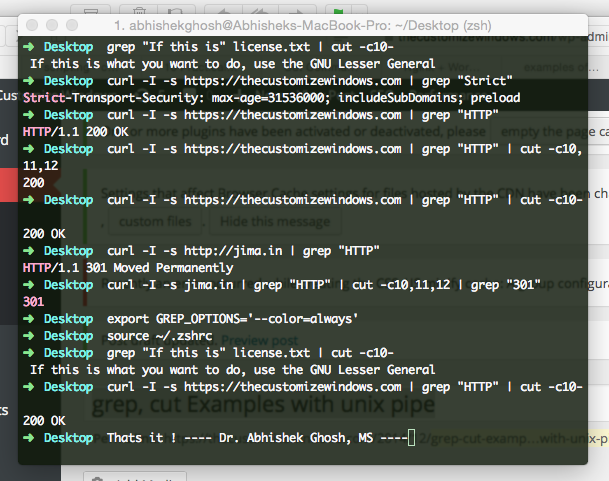 This was our basic goal to learn. grep will do some desired work, cut will filter the desired stuffs from that desired work. Unix Pipe will help. For example, this will return only the number of the HTTP status :

Actually you can grep again :

The above is a bogus way of using the utilities because we could grep "301" before. That we shown for example only. Syntax Highlighting, however will colorize the texts. There are very powerful usages, depending on the need.