Edit SSH After Login Info i.e. MOTD on Deb GNU/Linux including Execution of Scripts. In Post PRISM Acknowledged Era, Functions Has Been Changed. For example, you can not add colors to SSH Pre login Screen. The linked article was for pre-login, before the interactive shell started, that was a gateway of Edward Snowden’s co-workers to sniff what scripts you kept on your server. on official Debian Wiki, it is written – “Debian has a peculiar way of handling /etc/motd”, that peculiar now changed a bit more and you can not do whatever you want unless you are compiling the GNU/Linux yourself. But, many of the functions are basic and can be edited.

We are giving you the current directory and file structure after testing on Ubuntu 14.04 LTS. In case of Ubuntu, the directory /etc/update-motd.d is present. In case of older Debian, you need to create :

you’ll see these stuffs on Ubuntu : 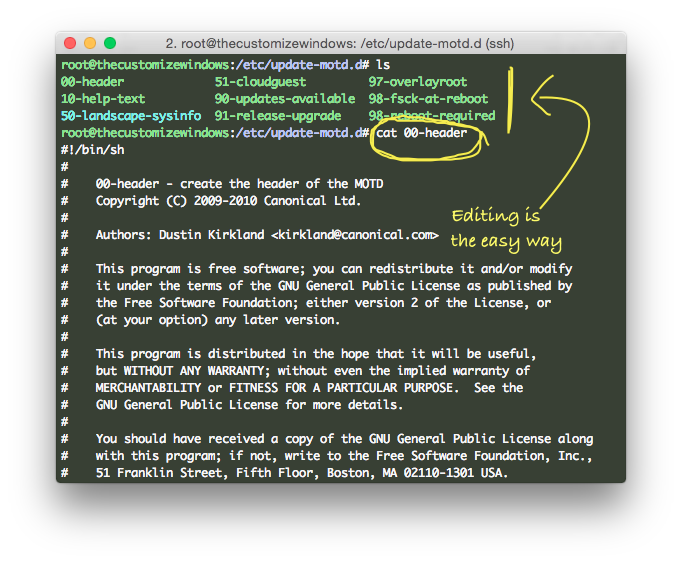 Editing the Existing Files is The Easy Way

If you cat each file, you’ll get the idea what they does, like :

Debian and Ubuntu uses a batch of scripts in /etc/update-motd that are executed by the pam_motd module when users login and fetch information from the various scripts assembled in /var/run/motd. /etc/motd is symlinked to /var/run/motd. You can modify the default files for adding shell scripts. Exactly it is that safe as nicely working. You can print text with easy command inside them like :

On a fresh install, the MOTD is generated from three places:

This Article Has Been Shared 754 Times!