Advertisement
You are here: Home » Logjam by NSA Threatens the Security of HTTPS
Advertisement

Logjam, which allows man-in-the-middle attacker to downgrade the vulnerable TLS connections, apparently created by NSA Threatens the Security of HTTPS. The series of various deliberately created security flaws including Heartbleed, are gradually being discovered possibly not even a minor percentage of the total works done by National Security Agency to run their mass surveillance tools. These was cleverly designed in an way so that the attack can affects any server which supports DHE_EXPORT ciphers and all the modern web browsers. At worst, the Governmental spyware activities are not limited to US Government only, the possibility of running such malware is persisting via countries like India, where Governmental wiretapping is legally allowed and the countrymen are not well aware of PRISM like semi-revealed. Up to Logjam, so far it has been showing the practical fact – regardless of the Nation, basically the current political model of Freedom actually is not compatible with Free Software driven community which were somewhat discussed while informing about another vulnerability named VENOM.

Logjam Threatens the Security of HTTPS Connections But Remained Unknown

Thousands of web sites, mail servers and other Internet services protected by HTTPS connection are threatened by this newly discovered attack that can intercept encrypted communications between the browser and the server, as well as read and modify data.It is named as Logjam and is a bug that resides in the TLS (Transport Layer Security) used by web sites to establish encrypted connections with users.

Logjam could be called the cousin of FREAK. Even Logjam was unearthed by an international team of experts from large organizations.

Because of this flaw, by running a simple man in the middle attack to the public Wi-Fi hotspots, hackers may be able to intercept the traffic and decrypt data easily.

Logjam can be exploited against a subset of servers that support the widespread Diffie-Hellman exchange protocol, a system that allows two entities that have never met before, to establish a shared secret key using a public channel. The key thus obtained can be used to encrypt all the subsequent communication between the two entities. Target of the hackers is to deduce the key that was negotiated.

Researchers estimate that to be affected by the threat are: 8.4% in the first 1 million of websites that populate the IPv4 space, 3.4% of the web sites that support HTTPS connections, 14.8% of e-mail servers that support SMTP, the 8.9% that support secure POP3 and 8.4 that supports IMAP. 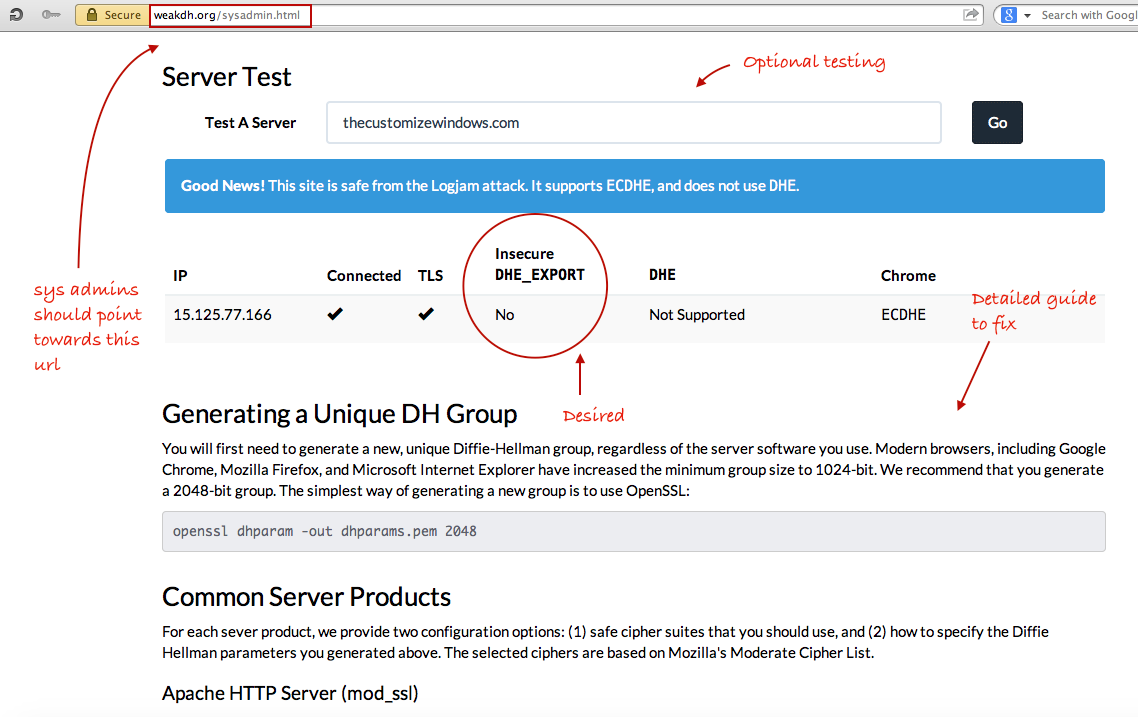 Saving Your and Your Server’s Backend From Logjam

As soon Logjam was brought to light as a security flaw, browsers have been updating and patching. It is important to check if your version of the browser is up to date and resistant to attack by Logjam. To do this, the researchers made ‹‹a website which is available to users to check the vulnerability of your browser. Just log onto weakdh dot org and read the message that appears at the top of the page.

If it is the message “Warning!…”, then the browser must be immediately run for update. The team of experts recommends all the server administrators to disable the support for the short DHE_EXPORT cipher suites, which allows connections to Diffie-Hellman to be “downgraded”. As regards to the server, the procedure is more tedious.

Articles Related to Logjam by NSA Threatens the Security of HTTPS