Advertisement
You are here: Home » Which Capacitor to Use When in Arduino Circuits
Advertisement

We guess, basic theory around capacitor itself not rocket science to most of the new hobbyists as capacitor is a topic included in Twelfth grade physics. But, Most of the New Users Are Not Sure How to Exactly Apply Capacitors in Their Circuits. Here is an Illustrated Article on Which Capacitor to Use When in Arduino Circuits.

Which Capacitor to Use When in Arduino Circuits

Components like capacitors and resistors are passive components and have practically zero usage by themselves. They are needed as part of a circuit designed to accomplish some task. So normally we do not show capacitor in our most Arduino circits (they are intended to make you learn the basics). Utilizing capacitor is somewhat “self taught”, human with time finds higher level circuit that flawlessly works.

Shift registers, counters put a bunch of noise on the power lines, you can use small capacitors to filter that noise out before it hits the chip. A servo motor draws a substantial current in short peaks. And USB power is not designed to provide such current peaks, hence the current peaks cause the voltage to vary, which the Arduino is not designed for. A capacitor acts as a buffer for current, so as long as the USB power can deliver the average current, the capacitor will help by smooth out the current peaks.

We have certain factors for deciding on capacitor types :

Exactly like resistors, multiple capacitors can be combined in series or parallel to create a combined equivalent capacitance.

When We Use Capacitor in Arduino Circuits

Signal Filtering : Capacitors can block out low-frequency or DC signal-components while allowing higher frequencies to pass right through. Example of capacitor signal filtering is passive crossover circuits inside speakers, which separates a single audio signal into many.

The above are common usages. 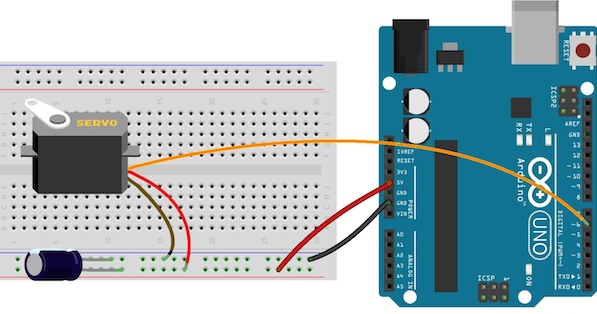 What Value of Capacitor to Use in Arduino Circuits

The rule of thumb is at least one 0.1uF per chip for decoupling and one big one by the power supply and one 10 ish one by noise sources. We can put a 100 on the power source and 10s at electrically noisy points. The uF figure is the amount of buffering. The value of 470 uF is probably based on experience and commonly used. Capacitors can be dangerous if they store either a high voltage or a large amount of energy that can be released in a very short time. A resistor (for instance 1k) in parallel to the capacitor solves this.  Don’t be in a hurry to add a 470µF capacitor, without some measurements. Also, make sure you put a smaller 100nF in parallel with the big ones.

To experiment, do the following:

This Article Has Been Shared 361 Times!

Articles Related to Which Capacitor to Use When in Arduino Circuits