Advertisement
You are here: Home » Arduino : Make LED ON One at a Time Using a Potentiometer
Advertisement

We Can Use the On-Board ADC to Convert Number Between 0 and 1023 Rotating Shaft. Here is How to Make LED ON One at a Time Using a Potentiometer With Arduino. That means, as we will turn the shaft of the potentiometer, LEDs will turn on depending upon the position. Actually before this project, one should get used with two basic examples on official Arduino website :

By turning the shaft of the potentiometer, we change the amount of resistance on the center pin of the potentiometer, so as the voltage at the center pin. So the volatage is from 5 volts (except Arduino Due) is close to zero (resistance on the other side is close to 10 kilo Ohm). As we turn the shaft, the voltage at the center pin changes. This voltage is the analog voltage that we read as input. The Arduino microcontroller of the board has n analog-to-digital converter or ADC which reads this changing voltage and converts it to a number between 0 and 1023. In this project, we are simply using that data in programmatic way to make it looking like volume control knobs with LEDs with physical wiring to turn on/off LED.

For this project, we will need : 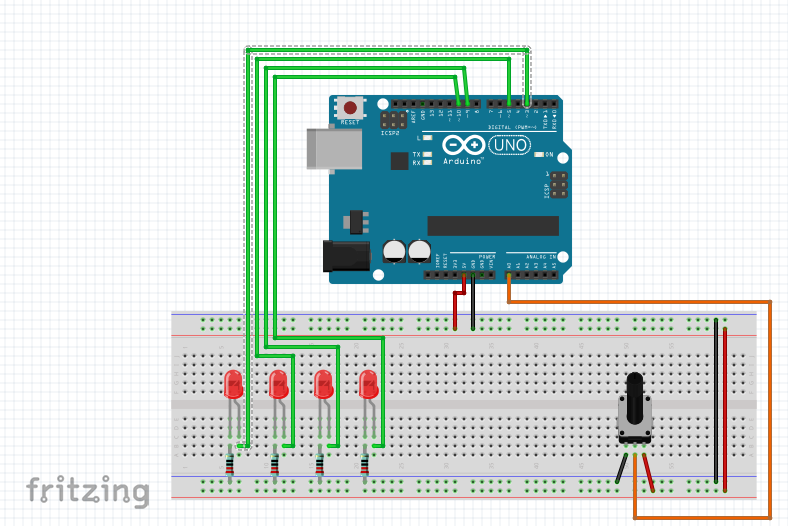 Here is the code :

Articles Related to Arduino : Make LED ON One at a Time Using a Potentiometer