Advertisement
You are here: Home » DevOps and Agile: What Are the Differences?
Advertisement

In our previous series of articles on DevOps, we stated that the aim of the collaboration should be to use the agile principles of software engineering across departments and thus to derive added value from the cooperation. While DevOps and Agile are two different things, they are often mistaken for one another. In reality, the two represent different approaches or practices in developing solutions for customers.

If you are an IT practitioner or someone who relies on a team of software engineers, the terms Agile and DevOps are certain terms you are familiar with. Agile and DevOps are more than buzzwords used to hype methodologies of software development up. They are approaches used by organizations to achieve a similar objective: to deliver the end product as quickly and efficiently as possible.

Let’s take a look at the similarities and differences between DevOps and Agile.

DevOps and Agile: What Are They?

In simple terms, Agile is a methodology that champions iteration, collaboration, and constant evaluation, all for the purpose of continuous improvement. When a development team adopts Agile as an approach, it relies on customer feedback, divides development projects into smaller tasks, and release smaller iterations for the purpose of delivering improved solutions. The origin of the agile movement is the agile manifesto of 2001. None at that time realized what economic significance agile would have. Agile was never planned in that way.

DevOps is something entirely different. It is the practice of combining development and operations teams for the purpose of streamlining the development and delivery workflows. By bringing the Dev and Ops team together, the development cycle can be made more efficient. DevOps also allows for software iterations to be deployed in smaller increments. DevOps takes the return of investment into consideration.

What are Their Objectives?

Once again, the two approaches aim to achieve similar but different things. Agile is a methodology used to simplify complex projects. When you take a look at the Agile project management methods, as detailed by Kanbanize, you will see that the primary objective of implementing Agile development is making sure that no big task can hamper the development cycle.

DevOps, on the other hand, focuses more on managing the development cycle from start to finish; from writing the first line of code to deploying the next update to the production server. This is why, in many cases, DevOps and Agile are often used alongside each other, despite having differences between them.

What are Their Focus Points?

Based on the objectives, it is easy to see how the two approaches focus on different things. While Agile method focuses more on allowing constant changes and continuous improvement, the focus of DevOps is unifying different stages of the development process into one seamless cycle.

Agile is used more due to the popularity of supporting tools like Kanban we mentioned. Using a Kanban board like Kanbanize, an Agile development team can organize tasks in a more efficient way, focus on one iteration at a time, and have more effective sprints over a shorter period of time.

DevOps, on the other hand, works towards automating many of the tasks handled by the software development team. When implemented together, a DevOps team can be as agile while relying on automated testing and automated delivery.

How are the Two Implemented?

We’ve discussed how DevOps works well with the Agile methodology. There is a simple reason for that: DevOps as an approach is designed to be framework-agnostic. You can incorporate DevOps into your existing Agile workflow without making big changes to the workflow itself.

Agile, on the other hand, relies on certain tactics like sprint and scrum. It is considered more structural but in a good way. This is also the reason why Agile uses tools like Kanban to further amplify its benefits. You don’t have to integrate all of the tasks into each sprint and instead maintain complete control over how each iteration is approached.

The unique approach of Agile methodology makes it more timeless. DevOps, on the other hand, is constantly changing. The latest form of DevOps integrates security and more advanced testing into the workflow.

What do I Need to Use the Two?

Both Agile and DevOps require your team to be constructed differently. As the name suggests, DevOps requires a team of operations specialists to be involved from the beginning. It is up to the Ops side of the equation to make sure that the codes added to the iteration are compatible with the production environment.

Agile, on the other hand, requires team members with different but similar skills; let me explain. For the Agile method to be effective, you need a balanced team with individual skillsets to match what the development project requires.

That balance allows for more seamless development. The use of Kanban boards and other similar tools makes it easy to spot potential bottlenecks. When you only have one UI designer, for instance, you will see on the Kanban board several UI-related tasks piling up and hampering the rest of the development process. When that happens, you know that you need to readjust the balance.

What about the Timeframe?

Once again, the two differs in how they approach a development project. Agile focuses more on well-defined iterations programmed into sprints. Each sprint can be as short as one week long, but it never exceeds a month or so. Individual sprints also have milestones added to them, so measuring performance at the end of each sprint is fairly easy.

DevOps, on the other hand, appreciates the lack of pre-defined timeframe entirely. Iterations can be completed in a matter of hours, and every iteration gets deployed almost immediately. The rapid cycle of DevOps makes managing versions and setting bigger milestones more difficult to do.

The two targets different areas as well. Agile is more suitable for complex software development, while DevOps is meant to be used in the development of end-to-end solutions, which usually requires faster delivery. Even the way feedback is capture differs since DevOps relies more on internal feedback rather than input from the end-users.

So, which Approach Should I Use? 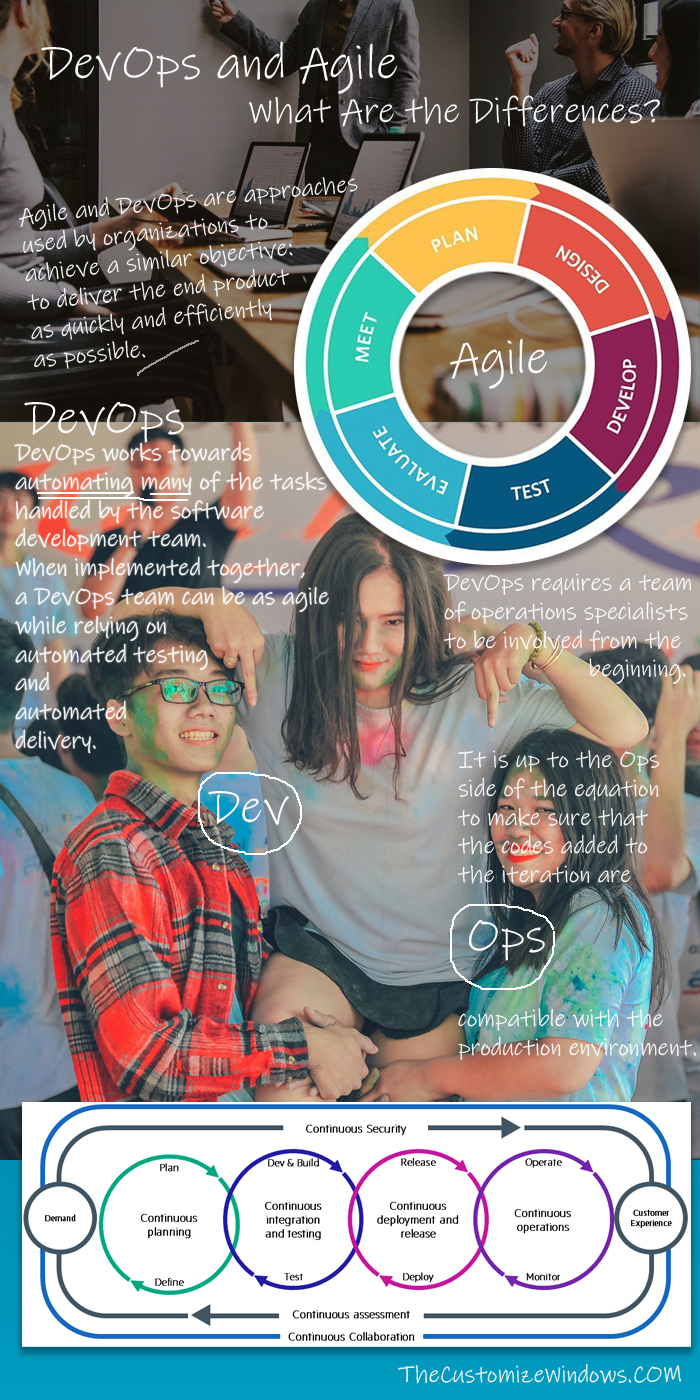 Since both methods offer different advantages, choosing between the two is a matter of finding an approach that meets your specific requirements best. Both approaches can be implemented effectively under any circumstance, albeit with different results.

It is also clear that the two are similar but very different. Based on the aspects we covered in this article, you can now choose the right methodology to implement and structure your development team for better and more efficient performances.

Tagged With can an airport be designed and constructed in agile method , agile and devops , what are agile and devops methodologies , using devops for agile projects , sprinting and the devops cycle , match a few agile practices to dev-ops principles , does devops require agile , devops kanban sprints , agile devops and kanban , when does devops join the agile sprint

This Article Has Been Shared 566 Times!

Articles Related to DevOps and Agile: What Are the Differences?