Unpredictable numbers were first used in gambling, slot machines and roulette wheels. In these use-cases, random number generation is regulated by governmental gaming commissions. Once, even the best online slots machines used to suffer from cheaters a lot before technology got more advanced, and now there are minimal ways in which a user can cheat the system. Good physical methods for generating random numbers are also the dice and drawing of lottery numbers with the typical machines. Random draws in relatively fast succession were realized in electromechanical gambling machines, based on cam discs with eccentric wheel and a switching time variator.

The physical random number generators are not fast since independence and equal distribution of the generated random numbers can only be achieved by sufficiently large distances in the observation of the physical processes or intercept methods. However, this is only a question of the technology used, because random processes such as thermal noise have limit frequencies of many terahertz.

There are other physical issues. Such as, Geiger-Müller counter tubes typically have a lifespan of one trillion pulses and are also dependent on temperature, magnetic fields and supply voltage. Also, for Geiger counters, the pulse rate must be significantly higher than the clock frequency at which the pulses are read. One solution to this problem is to use many random number generators in one unit. According to the central limit set of statistics, you get perfectly random bits even with bad random number generators (provided there are enough random number generators used).

Official Arduino software has a function named random(), which generates pseudo-numbers. This is a lower level function. The official Arduino library for ESP32 supports esp_random() function which is the way to get the true random number from the RNG_DATA_REG register. The associated file can be found here on GitHub (Line number 138).

The software and hardware of random number generation can be tested with a small sketch for the ESP32 : 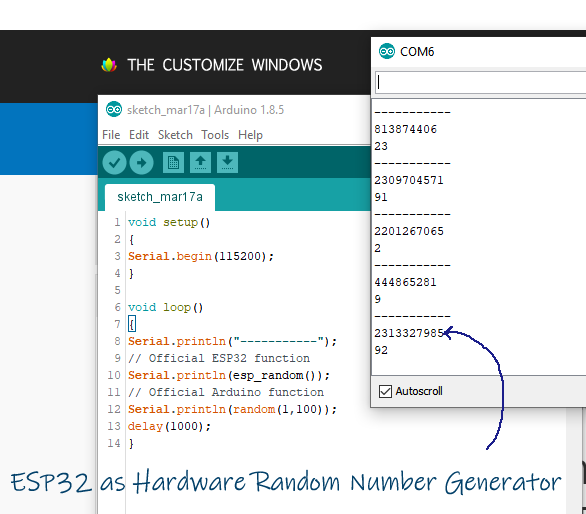 This Article Has Been Shared 834 Times!