Anti-noise is also known as Active Noise Reduction is colloquially understood as a sound that is artificially generated to extinguish sound using destructive interference. For this purpose, a counter-signal is generated that corresponds to that of the disturbing sound but has the opposite polarity. Two different problems have to be distinguished:

If a noise source emits sound, one tries to achieve by “counter-sound” from another place that destructive interference reduces the resulting amplitude (and thus the sound energy) in some limited areas of the room. In neighbouring areas, on the other hand, the sound energy increases, since at no point energy is absorbed, but only redistributed in a controlled manner. So far, it has not been possible to calm a volume of several wavelengths overall. So far, the only active sound attenuation in pipes in which the sound waves are rather linear has been successful.

In a sufficiently small enclosed area with dimensions smaller than λ/4 (as between ear and headphones), the diaphragm of the headphones acts like a sliding wall, which ensures approximately constant overall pressure (Acoustic Short Circuit). A distinction must be made between sound insulation, in which incident sound is converted into thermal energy. In this way, only reflection is prevented.

In the case of headphones with active noise cancellation, the ambient noise is measured with a built-in microphone and the proportion that would remain on the ear is calculated with the help of the acoustic transmission function of the headphones. For this part, an opposite-pole signal is then generated in the headphones to compensate. On the eardrum, the sound from the outside and the signal from the listener meet as sound. The sound pressure level is significantly reduced. In addition, a useful sound (speech, music) can also be played back via headphones.

Even headphones with active noise reduction systems cannot eliminate noise. On the one hand, each person has a different inner and outer ear shape, so only a precise adjustment in the laboratory would allow a complete neutralization. On the other hand, the skull bone also transmits sound to the eardrum (“structure-borne sound”); this proportion cannot be influenced by counter-sound.

Meanwhile, there are also more and more earplug headphones that use anti-noise, even if they have a worse noise reduction. 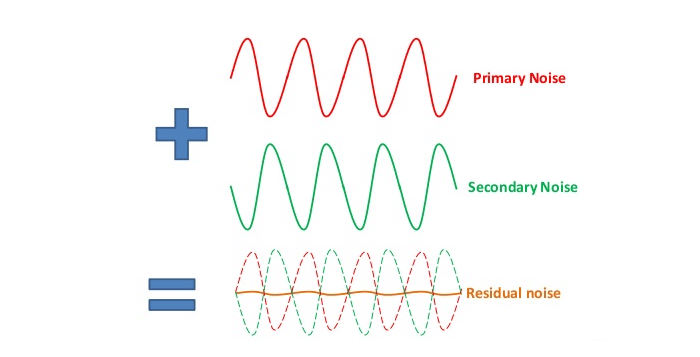 The reason for the development of such headphones was the need for noise protection for pilots. ANRheadsets can be used in aviation – for example for helicopter pilots – to ensure the most fatigue-free environment possible. The rotor noise contains extremely strong low-frequency components, which are only slightly dampened by headphones. Due to the masking effect, this also obscures higher-frequency signals that are required for voice communication, so that the volume of the headphones must be raised very sharply to be able to understand air traffic control at all. If the low-frequency rotor noise is dampened using this method, the communication volume of the headphones can be significantly reduced.

This Article Has Been Shared 157 Times!

Articles Related to What is Active Noise Reduction (ANR)