After extensive testing of the latest 15 inch Apple MacBook Pro 1440×900 pixel resolution with glare display, we hereby provide a basic review. Is it worth the extra cost for the Anti-glare variant, or you can just buy the Glare version, decide after reading the review.

Apple offers MacBook Pro of the latest edition (early 2011) in three different display solutions. In the basic version is from $ 1,119 with a WXGA display of 1440×900 pixels resolution and a reflecting surface (edge-to-edge) in the case. A finer resolution of 1680×1050 display can be ordered with some extra fee. Professionals likely to engage with a matte WSXGA + Glare surface costing $ 1,799 (in this test). This has been verified by us in this review already in detail.

In this report we want to light up even the cheapest version of the MacBook Pro, which is due to the generally high prices of the new MacBooks for some people is an attractive option. You can choose MacBook Air, which starts at $ 999.

Furthermore, we examine the basis of this test device, the benchmarks of the MacBook Pro already tested with identical core components in order to verify the observed phenomena for the use of Turbo 2.0, possibly to the small-sized power supply and a possible throttling if necessary.

Let us take a look first to the need for resolution. Striking is generally thought that Apple still have an aspect ratio of 16:10 set by. This offers compared to the currently predominantly encountered 16:9 widescreen display, an increase height of image. With the offered 1440×900 pixels in the initial version, the user receives a 24% larger area to work in comparison with the currently low in 15-inch models almost exclusively encountered HD resolution of 1366×768 pixels. An upgrade to a WSXGA + option would mean an increase of the available work area of ??about 36% and therefore lends itself in particular for professional users who use special software with numerous tool boxes , such as in the photoshop and other video editing. 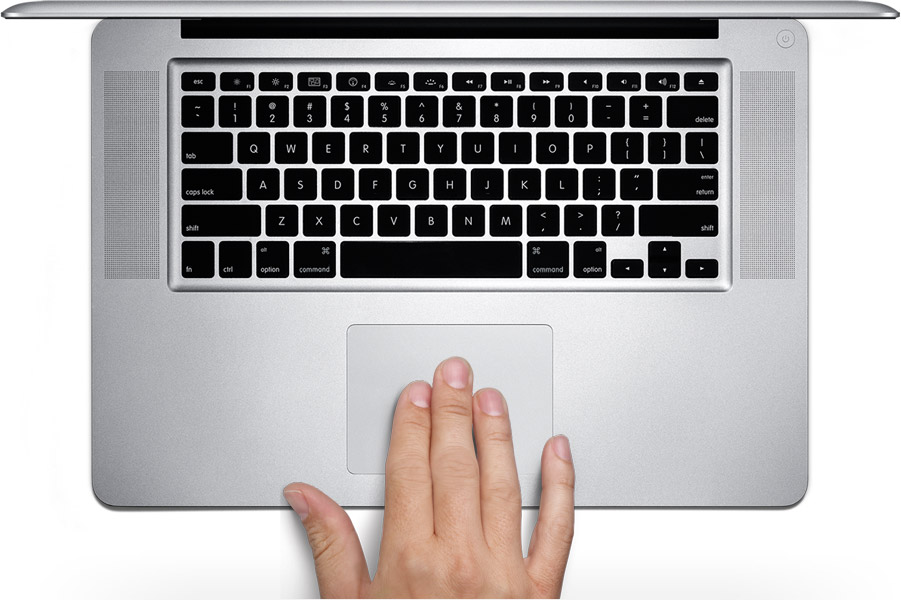 With regard to the Panel by the reproducible color space, we observe a good coverage of the sRGB color space. This means that the MacBook Pro 15 of early 2011 level crosses its predecessor of 2010. Compared to a standard panel, such as in HP Envy, MacBook Pro demonstrates the increased color space.

For long time, matt displays in notebook computers was granted for. Unfortunately, this fact changed in favor of the increasingly fashionable glare screen, which attributed manufacturers with a particularly good image contrast.

Besides the necessary ergonomic workstations for the display (reflections and eye strain) Anti glare is mainly easy to use at outdoors. Reflections make a reasonable use of the notebook in the worst case almost completely destroyed. Only a matte display surface in combination with a very good display brightness can contribute to any direct sunlight or unfavorable light sources positioned successfully opposed.

The horizontal field of view, this does mean more generous view, apart from possible reflections that occur while in the vertical range is already much earlier in case of deviation from the ideal perpendicular angle to the visible image changes.

The observed abnormalities in the stress test on Windows, however, we took an opportunity, even in this sample again to do some benchmark tests to rule out so possible defects in the first test sample can.CPU performance

Let us start again with the CPU-intensive benchmarks. The Cinebench R10 benchmark test (32bit) returns 3640 points in in Windows 7 (Boot Camp) in single-core rendering test. In multi-core rendering test, we came up with 13 500 points. This is slightly higher than the comparative device was able to reach (13045). A new test applied in multi-core test as a level slightly more than 13,000 points. Cause of these possible differences is turbo mode the CPU which do not always show a constant influence.

Glare or Anti Glare, that  is the question some of the most interested in the MacBook Pro. We think Anti Glare is better choice.

Two points speak in our opinion, decided to invest in a matte display: First, the intensive use of the MacBook Pros as mobile workplaces including daily usage over several hours. Glaring panels tire the eyes more quickly and were here clearly counter-productive. Second: Usage of the laptop on trips, such as in the train, which contains an account of the ambient brightness is not accessible. What makes a good battery life using the road, when you can hardly see the display? Exactly, we prefer the MacBook Pro 15 with Anti glare display on top of that finer resolution and access.

All MacBook Pro are made from a single piece of aluminum comes the unibody enclosure ” a breakthrough in notebook design.

This Article Has Been Shared 960 Times!