AdSense Text Ad Color Blending and Contrast is main ingredient to increase CTR. Finding the combination not easy, Google itself spends a huge to find it.
In previous article we have discussed on where AdSense Text Ad can be used perfectly. However, if any webmaster needs to use only AdSense Text Ad, needs tweaking.

If someone decide to use AdSense Text Ad only? – the breadth or width of the unit have to greater than the height or width needs to be more than 336 pixels. The reason is, dimension has no relationship with AdSense Text Ad like image / rich media ad, but the blending or contrast is important for AdSense Text Ad units, still recommended sizes by Google AdSense is an important factor.

Try to choose a horizontal unit to show only the AdSense Text Ad. It leaves only one option among the recommended unit sizes by Google AdSense – Leaderboard.

Standard Banner and Half Banner are notorious to most of the visitors – most users knows that Standard Banner is an Ad unit and tries to avoid the AdSense Text Ad units used.

Google AdSense program policy basically emphasizes about the AdSense Text Ad only. Because, the CTR can be falsely increased by making a visitor fool with AdSense Text Ad, an image / rich media ad itself says it is an Ad unit and the publisher can not change its appearance by any means.

One can not place arrow, thumb or some image like those which clearly emphasizes the Ad units (read AdSense Text Ad units). Those who have Google Premier Account can however modify the API as they like, so are the Double Click Premium Publishers. It is the CTR and keyword that apparently decides the value of the website.

There are few Million colors that can be reproduced by the monitor. However, human eye can not see certain colors if repeatedly shown. This is why AdSense asks to optimize the AdSense Text Ad units. AdSense describes three ways – Blending, Complimenting and Contrast to optimize the AdSense Text Ad units. However, Complimenting is just a part of Blending, if you think from a designer’s point of view.

Usable AdSense Text Ad Test Colors that works – Basically for the title only two mother colors – shades of blue or shades of your site’s hyperlinks or h1, h2 tag that works. But, Blue itself has few thousand variations.

Usable AdSense Text Ad url and description Colors that works – Only black. Google thinks green is better for the url as green indicates to “go”.

If you use an AdSense Text Ad unit on a yellowish horizontal background, it will create a sense of call to action unit. This is what Google uses – 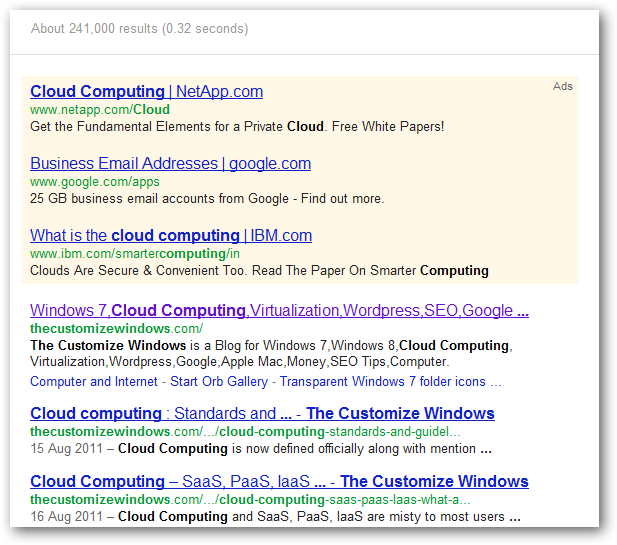 But this “AdSense Text Ad” is basically a premium unit! For us there will be the horrible arrow marks and label that will mark it as an AdSense Text Ad and will signal some visitor to avoid it. ?This kind of AdSense Text Ad unots are often used by the premier publishers.

Tips for getting higher CTR for AdSense Text Ad units