Ping or Packet Internet Groper is a diagnostic utility on computer networks which checks the status of the connection of the host on a TCP / IP network. Ping is the most widely used tool to to test or verify the local TCP / IP stack.

Ping was originally developed in late 1983 by Mike Muuss and first appeared in BSD 4.3.The name “ping” is derived from military technology. Since the Second World War sonar is used by submarines to detect various things. The emitted acoustic signal is described as “ping”.
Ping sends an ICMP (v6) echo request” packet (ping) to the destination address of the host to be checked. The recipient must, if support the protocol, according to protocol specification, it send back a response: this is ICMP echo reply or pong. If the target computer is not accessible, it responds to the appropriate router as Network unreachable or “host unreachable” (remote site is not accessible).

Ping may be abused to create denial-of-service attack, usually the victim server is flooded by running script to ping for infinite times from a huge number of command window on one computer or several. Ping of Death refers to a specific denial of service attack (DoS attack), with the aim of the attacked system to crash.

Ping and Round Trip Delay

The round-trip time is called the round trip delay (RTD), ping time or simply called Ping. This measured latency includes both the distance-dependent electrical signal propagation time as well as the processing time in the intermediate stations acting as routers, also the processing time in the TCP / IP stack of the sending and the destination computer. For connections with high workload increases the time from transmission queues in the routers.

Under Windows OS, the command syntax is :

How to copy paste Ping Result under Windows OS :

Those who are paying to use the OS : 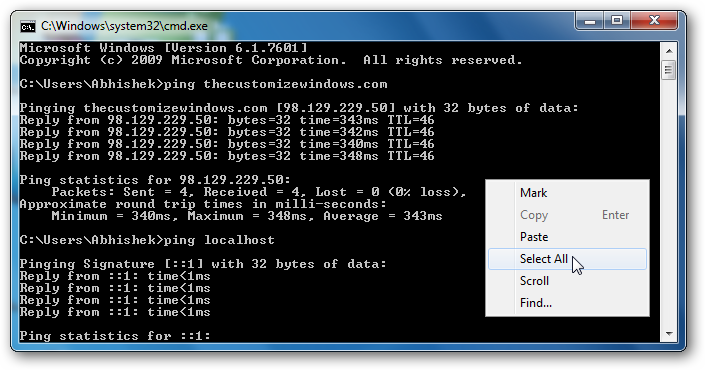 This Article Has Been Shared 669 Times!