Magnetic Resonance Imaging can be used to get cross-sectional images of a living body, which allow an assessment of the physiology and pathologic of an organ. Magnetic resonance imaging is based on very strong magnetic fields and electromagnetic alternating fields in the radio frequency with which certain atomic nuclei (usually hydrogen nuclei / protons) in the body, which can be resonantly excited, then the receiver circuit in the electrical signals collects it as data. The Magnetic Resonance Imaging device is not harmful like X-rays or other machines where ionizing radiation is used. An essential basis for the image contrast in Magnetic Resonance Imaging are different release times of different tissue type. Also see the different content of hydrogen atoms contributes to different tissues (eg, muscle, bone).

The method of Magnetic Resonance Imaging is based on the atomic nuclei in the tissue studied specifically (synchronous and resonant ) are excited electromagnetically and then to return to their ground state give a signal.
Some atomic nuclei (such as the hydrogen nuclei ) in the molecules of the tissue to be examined have an intrinsic angular momentum ( nuclear spin ) and are therefore magnetic. This understanding is the basis of Magnetic Resonance Imaging.

After switching off the high-frequency alternating field decreases the transverse magnetization, the spins align themselves so again gets in parallel to the static magnetic field. For this so-called relaxation they need a characteristic decay time. This is dependent on the chemical compound and the molecular environment. 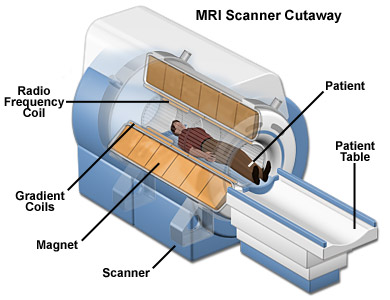 As a computer is basically used in Magnetic Resonance Imaging and a software layer analyzes the data the chance of data fabrication is more.