Head Mounted Display is worn on the head of a visual output device, the computer generated image is projected on a near-eye display or directly on the retina.

Due to the physical proximity of Head Mounted Display units, images appears to be much larger than the free-standing screens and in extreme cases even cover of the entire field is in view of the user. Since the Head Mounted Display followed by a head support all movements of the head of the wearer, user gets the feeling to move inside directly into the computer-generated image landscape. Some Head Mounted Display leaves other visual impressions of the environment and leave the user immersed in a completely virtual reality.
Head Mounted Display can in principle serve as a convenient replacement screen, allowing for example, viewing and editing of video material with extremely large image size. By virtual reality, aspiring pilots and tank drivers and risky medical surgical techniques on the computer so far gives the greatest form of realism. Image can be combined with other systems, the sense of sight and the semi-transparent augmented reality offers the possibility of all kinds of information directly expand into the area, ranging from tourist information to attractions on the direction of instructions on the road. 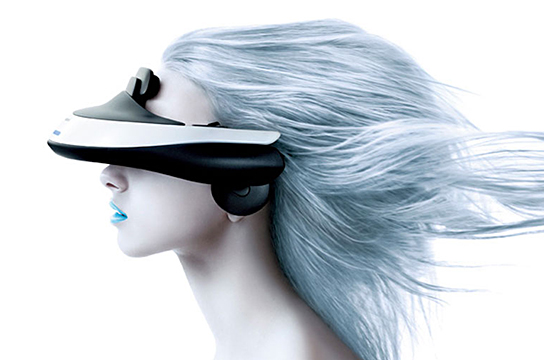 Modern Head Mounted Display are equipped with a virtual retinal display (VRD). This technique projects an image directly onto the retina. Thus a picture emerges, as if the data are floating in front of the eye. Together with a transparent or translucent glasses on the Head Mounted Display, the eye can detect the environment and the representations of the spectacles at the same time. Another advantage is that the image can be scaled and so the whole field of view is utilized. Modern Head Mounted Display are equipped with a screen resolution of 1280 x 1024 pixels available.

Head Mounted Display uses a head tracker that detect the head movement. With the collected data of the head position, the projected image in real time can be changed.