UMTS or Universal Mobile Telecommunications System is a 3G standard with significant higher data transfer rates than the wireless standard of second generation. Previously we wrote about the functions, features and types of USB Modems and we mentioned that some of these devices support Universal Mobile Telecommunications System (UMTS). UMTS supports significantly higher data transfer rates, up to 21 Mbit / s with HSPA + which is much higher than 2G technology. 3G stands for Third Generation, 2G for Second Generation and so on.

UMTS is one of the standards for the third generation mobile communication system. Today for the 3rd Generation Partnership Project (3GPP) maintains the standard. UMTS includes advanced multimedia services, satellite and on ground transmitters.

The following services is offered via UMTS : 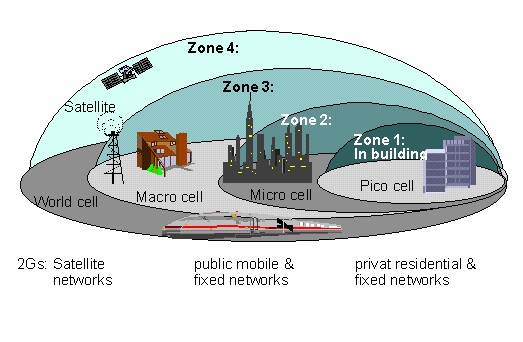 There are several phases of UMTS divided by years. The UMTS capable terminal, supports multiple data streams to stream simultaneously. This allows the UTMS users to make calls and at the same time receive e-mails.

Protocol Layers and Modes of UTMS

There is a clear distinction between Access Stratum and Non Access Stratum in UMTS, which is basically a summary of the protocol layers for wireless access. There are several modes of FDD.

In FDD mode (Frequency Division Duplex) the mobile devices and base station send data in two different frequency ranges, via uplink channel and downlink channel the base station.  For UMTS the importance of FDD is that, Wide band CDMA (WCDMA) falls within this FDD.

In TDD mode (Time Division Duplex), the mobile device and base station transmit and receive in the same frequency bandwidth, but at different times. The procedure is technically more complicated, since timing problems can occur when the transmitter is moved far from the base station.