Desktop virtualization generally describes the complete virtualization and relocation of the operating system in a data center. Thus the previously coherent system of hardware and software is divided and is shown separately. Only the image is displayed on the screen of thin clients or computer inputs from peripheral devices are forwarded to the data center for processing. This is achieved by different protocols of the various manufacturers.

The operating system, in this case, is represented by the virtualization software as it would run independently on a single physical machine. The virtualization software is the various hardware components, so that the operating system may appear to operate normally interact with the hardware. Thereby it is possible to execute the same number of virtual machines on a single physical machine.

Major competitors to VMware in desktop virtualization are Citrix and Microsoft. Other suppliers in the market with significantly lower market shares are still Oracle / Sun and Parallels. 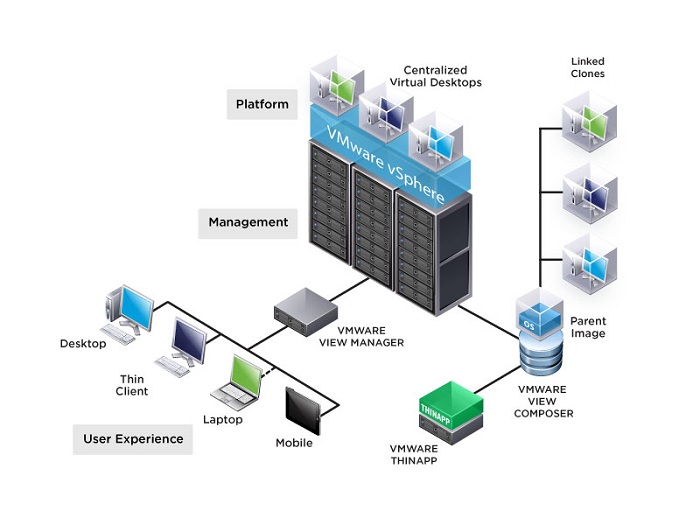 VMware View supports the transfer of data between the device and data center with three protocols: RDP (Remote Desktop Protocol), PCoIP (PC over IP) and the HP RGS protocol (HP Remote Graphics Software Protocol). Initially, only the RDP protocol was been implemented, which is gradually replaced by PCoIP. For backward compatibility, it is currently still supported by VMware View. HP RGS protocol is only supported by physical machines from Hewlett-Packard with the VMware View Agent.

The Remote Desktop Protocol, developed by Microsoft, offers the possibility to remotely manage desktops to the user or remotely to provide a desktop. It supports the use of different network topologies and multiple LAN protocols (including TCP / IP, NetBIOS). The screen content is rendered on the server and then sent to the client as securely encrypted data. The user inputs from the keyboard and mouse are encoded in the opposite direction also transferred to the server. Other features of RDP are the functions to optimize bandwidth (cache for bitmap data), the common benefit of the clipboard from the client and the remote desktop, printer forwarding, and the benefit from client devices such as sound card, memory (hard disk, Optical Drives), network printer in the remote session.

PCoIP is a product developed by VMware  for transmission of screen images and is optimized for use with VMware View. A key feature of the protocol is to detect different screen contents. This enables smooth work in low-latency. The user can access to similar features as he is accustomed to a fat client. The PCoIP protocol supports up to four monitors at the terminal with a resolution of 1900×1200 pixels and a color depth of 32 bits. USB devices such as input devices, printers, scanners and mass storage can also be used. A secure connection between the PCoIP client and server is an encryption between two points with 128bit AES  encryption.