Configuring Windows 7 as Web Server with a Static IP is the most important and easy way to allow any Windows Program to use access your web folder by World. Most (including Microsoft associated peoples, paid or non paid) has very little idea that actually Windows 7 Ultimate (since Windows 2000) has some features, like enabling IIS Server, FTP Server, DCHP Server, Telnet Client and UNIX compatibility. Here is a guide for Configuring Windows 7 as Web Server.

Configuring Windows 7 as Web Server is quite easy, but before that you must know whether you have at least :

To make the thing understandable, for those SIM cards of unrestricted ISP for Android Tablet’s 3G net connection, when used with a 3G USB Modem adapter, configuring Windows 7 as Web Server is possible. In fact you can use Android Apps on Android to point towards a public IP, like cam Apps. Universally they are VPN (that is why they cost higher per month), but the router is missing, you are using a Windows system instead of Linux based Android, nothing is configured and Firewall will always prevent to show your folder. For configuring Windows 7 as Web Server with such cheap and great trick (Android), you will not get much help for anyone, that is the reason we are making the basic rules easy, so that actually you can follow the ‘normal’ static IP conflagration.

Make sure that you have a Static IP. This can easily be discovered by using any web service, please Google with ‘what is my IP’ like phrase. Copy that IP to cross check in later steps for Configuring Windows 7 as Web Server.

Understand it : Your computer and ISP has configured your Internet connection in such a way that the connection can only be used to download not to access your computer by the public. This is for security as 99% will never use our guide for Configuring Windows 7 as Web Server.

If you have WAMP installed, you can set your path of public folder (in Windows, it is sites) as path, which normally should be :

This will make your work more easy as WAMP is running as Web Server. Open Windows Command prompt and type :

It will show up your all possible configuration.  Look at my case : 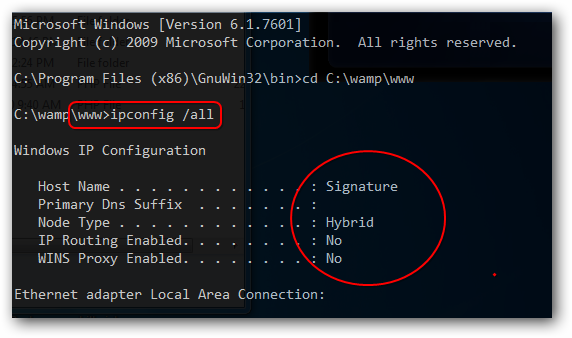 The reason my Windows command prompt is looking like Mac Terminal is described here. You can clearly understand, my Windows 7 is not configured as Web Server. You will see, with your Active Internet Connection, a table of PPP details (PPP means Point to Point Protocol and WAN means Wide Area Network) are visible. The data must be consistent with publicly available data of your IP. Most important part is understanding this complex Networking thing. Linux is easy to configure, Windows is difficult to configure. But if you do not understand the fact that whether your ISP allows to use your bandwidth with your fixed IP, these fighting with Configuring Windows 7 as Web Server will be meaningless. Do not change anything with PPP without knowledge gained via Googling, you will be unable to connect to Internet for a wrong configuration and have to reset.

Under Windows 7 Ultimate, point to Control PanelPrograms and you will see Turn Windows Feature Off or On link. Click that and this will jump for you as window : 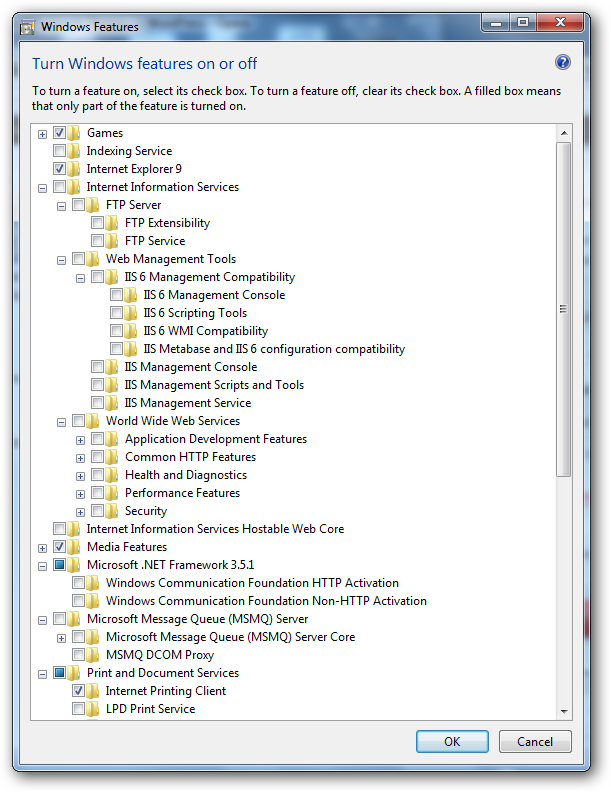 Read the documentation of Windows and ask them what to do or search on Google for which components are must be installed. For Configuring Windows 7 as Web Server, you need to install those parts. You will get the option to set the path later to expose to the World, that should be  C:wampwww if you want to use it as kind of LAMP server, otherwise you have to use as IIS server.

Almost all ISP who provides a static IP, usually keeps the DCHP server to off by default, this is for vendor locking and security. Windows 7 Ultimate, appears to be Desktop version of Windows 2008 Server Edition. You can read about Server OS and Desktop OS, actually the desktop environment (AERO) is installed but IIS and other networking parts are not installed by default.