Advertisement
You are here: Home » OpenFlow Network : The Idea Behind This Protocol
Advertisement

OpenFlow is an open standard that enables software-defined networking in IP networks, with this network technology makes the ways of managing networks easily. Previously we wrote about the basics of Software Defined Network (SDN). What we basically pointed is the first sentence of that article – Software defined network (SDN) abstracts and decouples the network system at the crucial point of traffic management through control plane and the data plane. A computer network is an ecosystem that through its evolution added its various constituent elements, such as the routers, load balancers, NAT or firewall. The software defined networking aims to reverse this way of thought in networking, turning the entire network in a platform and the individual elements in to programmable entities. The application executed on the network platform can optimize traffic flows choosing the shortest path, and can also optimize the network to maximize the utilization of the link to create different domains of reachability for different users. In this article we will elaborate the basics of OpenFlow Networking Protocol.

OpenFlow Networking Protocol has been developed a system in which the systems of internal application that need the transfer of large amounts of data may use the available bandwidth which is not used. Typical uses of this kind includes the daily replication of data, database backups and the transmission log. Consumers defines the source, the destination and the amount of data to be transferred with a central service. The service performs various calculations and sends the results to the router so that they know how to steer this data when the links are unused.

The communication between the applications and the service center are bidirectional : Applications inform the service of their needs, the service replication  and the application informs the service when it is done. Meanwhile, the routers in real time provides the usage information to the central service. Consequently, the network arrives to do a 90-95 percent utilization in OpenFlow Networking Protocol. 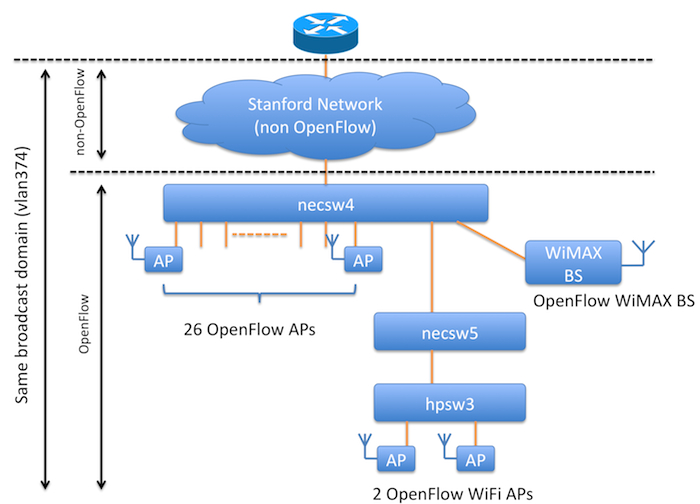 A large company hosting the virtual machine face a big problem : each user is isolated from the others. When a VM migrates from one physical host to another VLAN segment, it must be reconfigured. Inside the machine there is a physical network emulated by software that connects the virtual machines. There must be careful coordination between the VLAN and the physical world emulation software. The problem is that the connections can not be configured properly due to human error and the boundaries between the different tenant become confused. OpenFlow Networking Protocol allows the use of new features to be added to the VM management system so that it communicates with the infrastructure of the network when the physical and virtual machines are added or changed. The presence of OpenFlow Network ensures that each tenant is insulated from the others, regardless of how or where they migrate or rather how the VMs are positioned on the physical machines.

An Example of OpenFlow Networking Protocol

Take for example, some gamers setup up a Quake 4 Gaming server running on a laptop to give a way in a competition. The latency in this case is important for the reasons of responsiveness in the game for a practical fairness among the players. In the above example the computer used as a server has a low performance. During the competition, someone takes off the laptop and attaches an Ethernet cable, moving the connection to WiFi. The person then move the laptop in a nearby restaurant and returned back a hour later.

During this process the laptop’s IP changes four times and the band varies from 100 Mbps to 11 Mbps while on wired Ethernet connection or 54 Mbps connection on the bar. Despite all this, Quake 4 continues without interruption. Using this OpenFlow standard, an application has been written so it does not matter what subnet was when the laptop was moved, because IP address will not change. Even in the case of network congestion, the traffic on the game server will receive high priority. The router will attempt to deny other traffic before one have fulfilled the requirements of the game server, thus ensuring the smooth flow.

This was actually an official example for OpenFlow Networking.

Articles Related to OpenFlow Network : The Idea Behind This Protocol