Piezoresistive sensor is semiconductor sensor made of silicon. The resistive material is on a thin silicon membrane which on Pressure changes shows the value. So two terminologies needs to be explained – first is Sensor. We have about the sensor in our previous article named Sensor in Technology and Nature. We are not going in to details of Sensor in this article on Piezoresistive sensor. The terminology Piezoresistive is derived from combination of two words – Piezo and Resistive. Piezo is a Greek word and stands for pressure. Piezoresistive sensor changes resistivity due to force on it. These sensors are also known as piezoresistors.

Piezoresistive sensor : The Technology of Piezoresistance

With the development of telegraph in the 19th century, the problems of signal propagation and conductivity changes led to the observation of the change in conductivity or resistance under mechanical stress =. In 1856, the British physicist William Thomson, noticed for the first time, a change in electrical resistance with elongation of iron and copper. The same year, Lord Kelvin gave a lectureto the Royal Society of London, where he presented an experiment in which iron and copper wires were given weights and resistance change was measured with a Wheatstone bridge.

Herbert Tomlinson confirmed the change in conductivity in the presence of mechanical stress. The term piezoelectricity, meanwhile, appeared much earlier with Hermann Hankel in 1881.

The sensitivity of a piezoresistive device has the characteristic:

where EL and R respectively represent the relative change in length and resistance. The piezoresistance is due to the change in geometry due to the mechanical stress. The geometric factor of the sensor is represented by the variable K (Window 1992):

Where V is the Poisson’s ratio of the material. Even if the changes are relatively small, they allow the use of these sensors ( strain gauge ) over a wide range of applications. 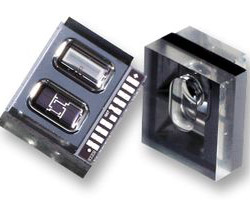 The piezoresistive effect can be used for the measurement of pressure and also humidity and gas concentrations. For example, when the membrane changes due to contact with moisture or gases in the volume and exerts pressure on the piezoresistor it can be measured by a Piezoresistive sensor.

Piezoresistive sensor can also be developed from polymer layers that respond to pressure and change its shape or volume. Piezoresistive sensors are therefore suitable for a variety of applications including solid state accelerometers and bipolar transistors.

Articles Related to Piezoresistive Sensor : How They Works