Advertisement
You are here: Home » Shutter Count : Reading The Death Certificate of Your DSLR
Advertisement

Shutter Count indicates the actual number of times the shutter blades with all the delicate mechanical parts of shutter mechanism of a DSLR has worked. Shutter Count indicates the impending death or collapse of the full shutter mechanism, the number which is predefined by the company. Indirectly it indicates crossing the officially declared number of Shutter Count means the death of the DSLR is impending. Because the repairing cost of such camera will not be limited within the Shutter mechanism, a normal sense obviously speaks that it has been the time for that DSLR to say permanent Good Bye. Legally a 110 years old person with Acute Renal Failure with Acidosis might have the chance to live, but practically that chance is very less.

In case of human, we use a scoring system named APACHE II for ICU / ITU. It is not the server software that is also said Apache2, closer by pronunciation. But for our DSLR cameras, unfortunately there is no scoring system to rightly predict the chance of mortality of our cameras. So we take the parameter, Shutter Count as an unit to somehow calculate the remaining number of times the camera might remain working.

Shutter Count, Shutter Mechanism and the relationship with probability of death

Any DSLR or any Digital camera one day will die not just because of aging, but because of usage. To understand the complex part of the Shutter, please read our previously published article – Shutter Button and Shutter Mechanism in Digital Camera. On average, 100,000 shutter count is the limit; but it goes up (or down) with the specific brand, model and batch.

So this shutter count is the number of pictures that a camera has already taken. It is also known as actuations. This number is important as the shutter blades are delicate mechanical parts, which are subjected to wear and tear. They are generally the first thing to fail on a digital SLR. The almost silently degrading part is the sensor of the camera – as we do not need to change our sensor as oppose to Film SLR camera, where film is the sensor.

In other words, knowing the number is somewhat like asking an astrologer the number of years you will live – a kind of vague, ill-defined probability.

Shutter Count : Reading The Death Certificate of Your DSLR 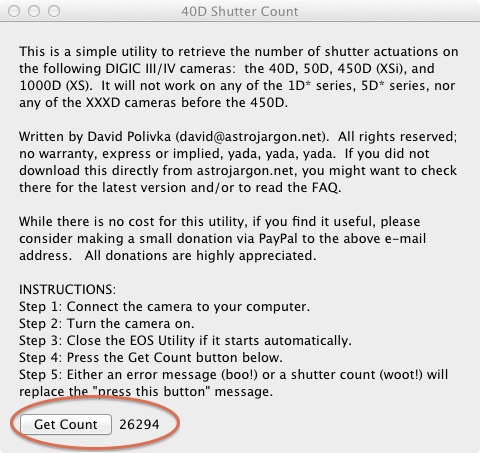 But, in case of DSLR, you will not need any Astrologer to know this Shutter Count – there are good number of softwares which will work fine to retrieve this data. You have to Install the software according to the OS in which you work (Mac OS X or Linux or Windows). Then run the program, connect the camera via the USB port and usually you will need to follow the onscreen instruction to get the number; like this is an example software to get the shutter count :

Yes, with an RAW / DNG image it is possible to get the shutter count, but probably that can have the chance of error. There is feeble relationship with the assigned number within the number of image saved. It is actually a hexadecimal number which is converted by these softwares to human readable number.

Shutter Count is usually never zero out of the box, possibly due to the automated mechanical checking done for quality control in the process of manufacturing. No, the counter is not reset even when the shutter is replaced, at least for Canon. Neither in any legit way it is possible to reset.

This Article Has Been Shared 616 Times!

Articles Related to Shutter Count : Reading The Death Certificate of Your DSLR