Advertisement
You are here: Home » Text Editors for Mac OS X : Best of the Bests yet Free
Advertisement

Text editors born from the need to enter code of computer programs and data into the computer. The precursor of text editors were therefore hole punch cards. The history says that the he first Emacs implementation was by Richard Stallman along with the other developers. These powerful Text Editors has more features than the default TextEdit software of Mac; although feature wise TextEdit is far superior than Notepad, the default Text Editors for Windows OS.  With the advent of computer terminals, CLI based text editors became important. One of the first programs of this group include the 1967 written O26 editor on CDC 6000 – mainframes and the vi editor from the year 1976. The Vi editor is still the standard text editor for unix like operating systems.

Emacs / GNU Emacs : Possibly the fore father of the current style of Text Editors. Details and download link can be found on FSF’s website :

Aquamacs : Modified version of GNU Emacs. Can be downloaded from : 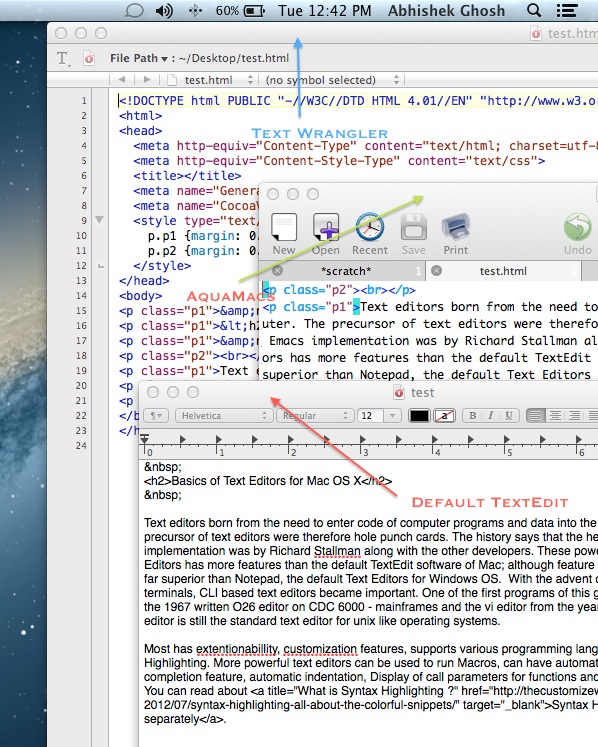 TextMate is another software which is historically quite important. TextMate 1.5 won the Apple Design Award in 2006.

Vim (Vi IMproved) for Mac OS X : Important because we use to edit the vimrc file for changing the color profile for syntax highlighting for command line simulator like iTerm2.

Gedit : gedit is the official text editor of the GNOME desktop environment. We wrote about Windows Gedit before.

Please add more names of Text Editors for Mac OS X (under GNU GPL or Compatible License) if you know to be actively existing, through comments.

This Article Has Been Shared 219 Times!

Articles Related to Text Editors for Mac OS X : Best of the Bests yet Free