Token Ring Local Area Network (LAN) Technology is a networking technology for computer networks, it is defined in the specification as IEEE 802.5. It defines the cable types and signaling for the physical layer, packet formats and protocols for the media access control (MAC) or data link layer of the OSI model. It is one of the two forms of implementation of the method.

The basic principle of Token Ring Local Area Network (LAN) Technology is collision-free transmission of data packets between stations. The method is also suitable for 100 Mbit/s (HSTR, High Speed ??Token Ring) beside the traditional low speed one and specifies 1 Gbit / s, but is hardly used anymore. The name token ring is given because the network with the token-passing access method works with the establishment of a logical ring topology. The connection to the medium is so active (passive for Ethernet, to compare), which means the network stations participate actively in passing of the token. Again, Token Ring Local Area Network (LAN) Technology is a protocol that lives on the layer 2 (data link layer) in the OSI model. 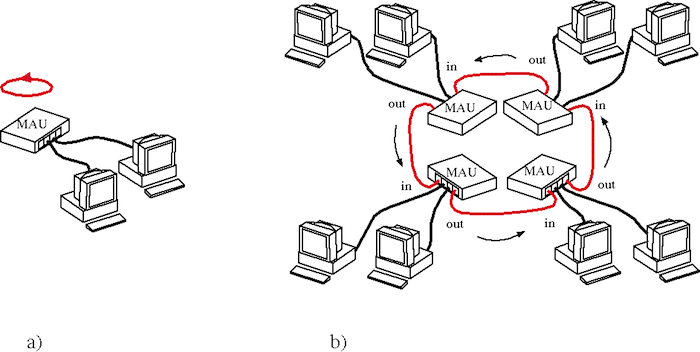 A token circulates in Token Ring networks : The token is always passed from one node to another. Even at idle time, the stations give the packet continuously. Now if one computer wants to send data, it waits until the token has reached it, it hangs the payload on it. It also adds the token to control signals and also sets the token of o bit (free tokens) to 1 bit, from the free token data frame is formed.

After the operation, the computer resets the data frame back to the ring, this is exactly how the free token previously passed by each node. Each computer checks to see if the packet is addressed to it otherwise put it back in the ring.

The intended recipient receives the data frames addressed to it, it will copy the user data and acknowledges the data received. The sender receives the acknowledgment and sends the token to the next user data. Here, a sender must take up the token only for a certain time before it release it again. Thus each node is guaranteed is in a ring and is allowed.

This Article Has Been Shared 447 Times!