NAND Flash Memory is a type of flash memory, which is made ??in the so-called NAND technique which refers to the serial arrangement of individual memory cells. These consist of special MOS-FETs which as in a NAND-gate are interconnected. There are four manufacturers of the corresponding NAND Flash Memory chips : Samsung, Toshiba, IM Flash Technologies, a joint venture of Intel and Hynix in cooperation with Numonyx. Market Leading manufacturer of NAND Flash Memory is the Korean company Samsung , followed by Toshiba which together produce the majority of all chips.

The space requirement for a flash memory cell in NAND technology is, according to Toshiba only about 2/5 of the surface of a memory cell in NOR technology. NAND flash memory works basically as page-and block-oriented. A page consists of a summary of at least 512 bytes, but this is enlarged during the miniaturization of transistors and associated increase in storage density to 4096 bytes to 8192 bytes. Several pages are grouped into a block. The block size in smaller memory sizes was 16 kB and is now with larger memory blocks.

Pages can be written only once; further write operations are possible only after a new deletion. Like usual flash memory, the bits can be tilted in bytes of only 1 to 0th. The reverse is only accessible via a deletion. In NAND flash memory, it is common that some defect in blocks persists, the so-called bad blocks, already present at the time of delivery. These are already detected by special tests by the manufacturer and marked as defective. Later they have to be taken into account by the driver software. Guaranteed by most NAND flash manufacturers that the first block of a memory module for a given number of write operations is error free. This allows the storage of important initial data as a bad block table at a fixed address, while all other data must be variable in their respective address locations. 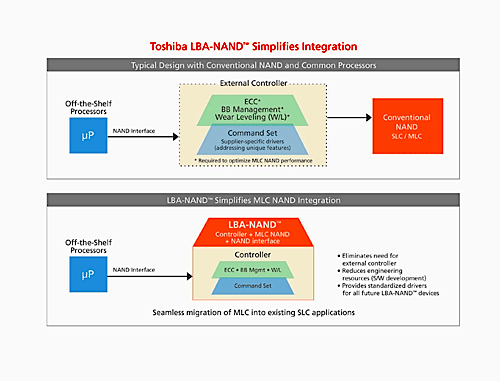 NAND memory is usually a multiplexed address data bus with a width of 8 bits. The protocol is command based. The bus interface used demands a relatively large software effort to control. NAND flash memories are mainly designed for large amounts of memory, they are used in USB sticks, flash – memory cards (eg CF and SD cards), SSDs and in virtually all semiconductor memory based MP3 players.