Flash Modes are another important point to learn DSLR Photography. Virtually all DSLR cameras are sold with a built in flash though the quality is unfortunate. Previously we talked about the popular Fill Flash in Digital Photography and External Flash Unit. Let us see why and how we can use this built in flash with the proper Flash Modes.

Why to Use Built-in Flash with Flash Modes ?

There are situations in which, we are forced to use it. For example in photos taken at parties, both outdoors and indoors in the evening. It is therefore important to know the various flash modes to make careful use. The names that we will use in this article to the various flash modes are pretty generic. However, the availability of each flash mode depends on the model of the camera. Some modes mentioned, therefore, may not be present on your DSLR.

This is the default mode in the automatic shooting modes. As you can guess, it is the most immediate : when your subject is underexposed or the whole scene is too dark, the flash pops and clicks when you press the shutter button.

This mode is self-explanatory. When used, the ignition of an illuminator before the flash, reducing the red-eye. Obviously when photographing people or pets with the flash it is needed. Sometimes it does not guarantee the solution to the problem of red eyes. 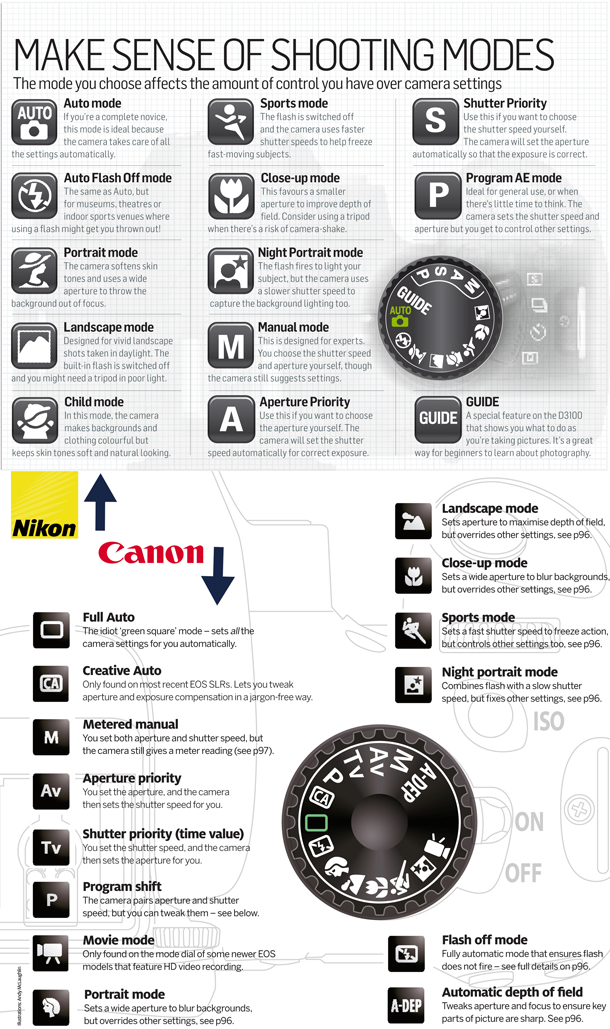 The image above has less to do with this topic but we found it for you as an useful resource.

The slow way is quite interesting, but needs an introduction. Usually, when you use the flash, the exposure time selected by the machine is very short (1/250 of a second). The duration of the light emitted by the flash is still shorter. Therefore, if we are using the flash in the usual situation where the ambient light is low, we will have objects closer to the lens illuminated by the flash and the background very dark or totally black. This is because the short exposure time does not allow to capture enough light from dimly lit areas of the scene.

When using the slow sync flash mode, the camera will set the shutter speed to a slower value, in order to obtain better exposure to those areas that would otherwise remain in the dark. Thus described, it would seem the perfect flash mode, which allows for subjects in the foreground lit and backgrounds are well exposed. Unfortunately it does not. The exposure time, in these situations, will be most likely too slow for a shot. We will then place the camera on a stable base like tripod and apply some of the techniques to avoid blurred photos.

In the case of this flash mode, the curtain is the diaphragm. When it is selected, the flash fires before the diaphragm closes. In other modes, on the contrary, the flash fires as soon as the aperture opens. In the rear curtain flash mode, therefore, the ambient light is “registered” by the sensor before the flash hits the subject in the foreground. When the exposure time is sufficiently low (below 1/60 of a second), objects and moving lights create the trails that end in the moment in which the flash fires – freezing the scene. It is thus possible to obtain results similar to those you saw here and there.

Tagged With https://thecustomizewindows com/2013/05/flash-modes-using-the-built-in-flash-on-dslr/ , the flash mode , using flash modes on DSLR , using flash or no flash on dslr

This Article Has Been Shared 314 Times!