Advertisement
You are here: Home » Built-in Flash is Great if You Know What to Avoid
Advertisement

What are the Most Serious Defects of the Built-in Flash?

The reasons why the built-in flash should not be used are varied. Let us see the main points:

All together these defects lead to take photos that can be useful as memories, but in 90% of cases have no artistic value. Typically, when using the built-in flash, it happens that the subject closer to the lens are flattened by light from a front direction, losing three-dimensional effect and color rendering aspect, the background is often almost becomes black, as the reduced exposure time used does not allow to correctly expose the background, unpleasant harsh shadows are cast by all the illuminated objects.

Built-in Flash is Great if You Know What to Avoid

Knowing the limitations makes to to get the most out of it – we actually paid for the lamp! The moral is that you should avoid as much as possible to use the built-in flash on camera, even if it is an expensive digital SLR. Especially if you want to have the beautiful photos, with a minimum of artistic value, it is sometimes better not to do any rather than having to use the built-in flash. Fortunately there are some tricks and some accessories that we can use to improve this situation.

First is the well known method in case of DSLR – bounce flash for your dSLR by using a white card. On using a high ISO and longer shutter is good, and you can do little bounce card and diffuser gimmicks, but the absolute difference these make just is not t enough ” the built-in flash still will suck. Obviously use the fastest glass. No other should not complain for copying the idea – bouncing the light is quite old method plus they have not mentioned the most important aspects – what should be the value to take the photos. Let in as much ambient light as possible. Just because the flash is on, do not let the camera select 1/200 and be the sole source of light. The more ambient light you have, the less contrast you will have with the flash. Even with subjects moving, set the shutter speed as low as you can and dial in some negative flash exposure compensation. We would start without flash and let us say the right ambient exposure is f/2.8 and 1/15th second. We would then bump the shutter speed to 1/30th or 1/60th and try the flash with -1 EV and adjust from there. Handkerchief, small envelope, wax paper all work fine. Just remember to set the flash exposure compensation to properly expose the image. We have an excellent guide – What Camera Mode to Choose Depending on the Situation? Read more: What Camera Mode to Choose Depending on the Situation. The illustration is great. 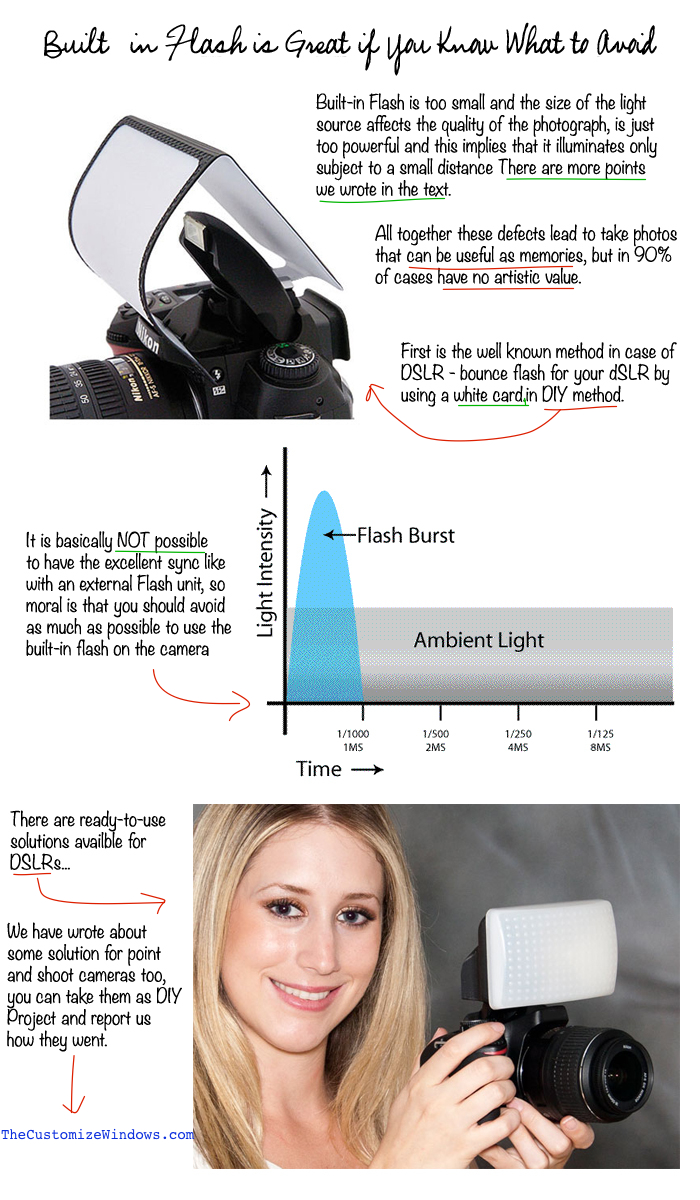 Ready made Pop-Up Flash Diffuser is available for the same usage for DSLR. But these methods make the point and shoot camera users to dark again – it is a fully fixed thing which apart from theoretical improvement in adverts has no change since 35 mm Film are in use. OK, we have a great surgical solution for your point and shoot camera. You need to get a rectangular box like thing, which is a bit bigger than the Flash junk’s glass. For example, may be a cut off part of match stick box will suit the size. On the open end, add some paper or artificial material that is whitish and opaque. There are kind of material available in local book stores in rolls. Now, how to mount – Well, the best way is to use surgical tape to ‘mount’ it on the Flash. So the whole thing –

This is all about we thought for two kind of cameras.

This Article Has Been Shared 488 Times!