Carbon Fibers and related oxidized fibers are very important among today’s textile raw materials. A large part of carbon atoms are stationary, extremely thin carbon fibers, primarily manufactured for composite production, but can be made ??into fabrics and chain-based knitting machines in one or two directions and in circular knitted fabrics, non-woven fabrics but even braiding of carbon fiber can be done from yarns for industrial production (e.g. reinforcement material in composites) or for protective clothing. Carbon Fibers are known to the most by name, but what this Carbon Fibers actually is; that is not known to the most. Carbon fibers are the fibers inorganic-based synthetic fibers included in traditional classes.

The history actually is quite older but we are going to describe the Carbon Fiber we see today. In 1969, the British Reinforcements company produced the world’s first carbon fiber fabric. Today, the procedure is based on polyacrylonitrile which is the most commonly used method and material of carbon fiber, statistically have 90% carbon with the material. In the 1970s experiments were started with the result of 85% carbon content with tar as a starting material, which is a crude oil derived as by-products and has very high tensile strength, but it did not work for carbon fiber production for certified against compression resistance tests. The latest development trend is carbon nanotubes. These tubes have a diameter of nanoscale – are have unique mechanical and electrical properties. Textile applications is not yet timely.

Preparation of the carbon fibers as an organic compound started from which the fibers are produced. The fibers are then typically stabilized by partial oxidation, in oxygen-free medium and then heated and stretched into carbon.

Nowadays, the production of carbon fibers commonly is PAN – acrylonitrile obtained by polymerization, however, in the polymer chain other molecules are included for other useful production process. Radical or nucleophilic catalyst causes polyaddition to start Monomers in solution and precipitate a solid solution of the PAN-fibers. The PAN fibers has disordered nitrogen-containing side chains.

The second step of the stabilized fiber pyrolysis (carbonization). In doing so, the fibers becomes an inert oxygen-free, such as pure nitrogen, argon or helium. Meanwhile, the oxygen and volatile nitrogen compounds e.g. hydrogen cyanide, ammonia, carbon monoxide escapes. This product is carbon fiber and the carbon content is above 90%.

As for the synthetic fibers in general, carbon fibers and the fibers of the oxidized fiber bundle. Cable can be prepared in bundles of thousands, or possibly tens of hundreds of thousands of fiber containing filaments. A staple fibers mixed with plastic composites preparation or non-woven fabrics are used in the manufacture of many industries. 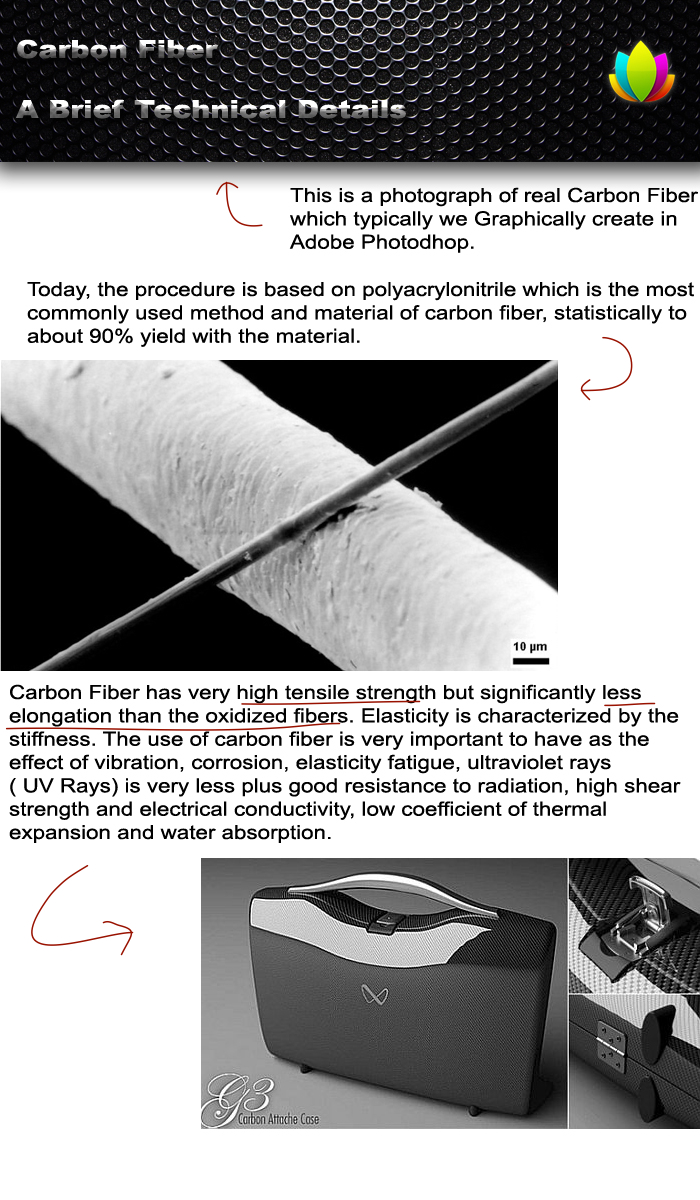 Carbon Fiber has very high tensile strength but significantly less elongation than the oxidized fibers. Elasticity is characterized by the stiffness. The use of carbon fiber is very important to have as the effect of vibration, corrosion, elasticity fatigue, ultraviolet rays ( UV Rays) is very less plus good resistance to radiation, high shear strength and electrical conductivity, low coefficient of thermal expansion and water absorption.

Interestingly, while it is good as insulating material (oxidized fiber) the carbon fiber, on the contrary, is a good conductor of heat. A similar difference is seen in the electrical conductivity as well. The fact that the oxidized fibers are electrically insulating material, it means that they are prone to electrostatic recharging, which is the textile processing and in some application areas can be confusing, so they demands a surface treatment to prevent this phenomenon. Electrostatic propensity of the oxidized fiber is significantly lower than the general synthetic fibers, because the content of the fiber is high, 8-10%. Some of these fields of application, preferably the fibers have a good acid and alkali resistance.