lighttpd is a free Web Server Software distributed under the BSD license, used to power the high performance environments. lighttpd web software powers many known websites. We wrote about Apache HTTP Server, nginx HTTP Server before; this lighttpd is more light. It is faster, has a smaller memory footprint than other HTTP servers as well as intelligent at CPU load management. The original lighttpd version was written by Jan Kneschke to handle 10,000 parallel connections on one server, at a single point of time. 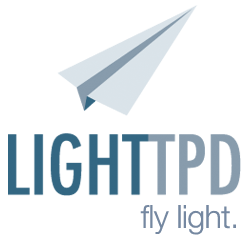 The user interface of FastCGI, SCGI and CGI for external programs are used to write web applications in any language usually used on servers. PHP is popular, its performance has been particularly optimized.

The main disadvantage of lighttpd face rival Apache is not supporting files . htaccess : directives are evaluated only once, at server startup and require a restart to be taken. In easy words, lighttpd does not support .htaccess files like Apache httpd does. That is why where the word “light” in “lighttpd” comes into play. However, one can migrate these rules from Apache httpd’s mod_rewrite to lighttpd’s mod_rewrite. Installing on Debian is easy :

We can make PHP5 to work in Lighttpd through FastCGI. Ubuntu provides a FastCGI-enabled PHP5 package. Meebo, YouTube, all Wikimedia websites, almost all Tube sites, Torrent sites runs Lighttpd servers. The reason of using can be understood – because of huge user number at once. These are the features of lighttpd in brief :

This Article Has Been Shared 629 Times!