Depending on the situations, by applying one or more of measures, choosing correct equipments and accessories, we could definitely avoid blurred photos. It is not that, the core topic – How to Avoid Blurred Photos is discussed for the first time within this website, just like we demand more practice to be perfect, the next shot of guide for the same issue simply becomes more effective – because for the feedbacks we receive.

Introduction to How to Avoid Blurred Photos

As said, this is not a new topic – but possibly the previous article, How to Avoid Blurred Photos in Digital Photography is merely an introduction.

How often do you ever find yourself in situations where it was almost impossible to avoid blurred photos? It happened to you several times, for sure. It was always in situations where the available light was poor and the flash was not usable in someway or the other. Such situations may occur, for example in museums, concerts, theatrical performances, during celebrations in closed rooms, in the case of outdoor photos on evening and night hours and so on.

Broadly, in order to capture a sufficient amount of light to avoid a dark picture, we must hold open the shutter for a relatively long time, so that more light reaches the sensor. In the interval of time during in which the diaphragm is open may create two main problems:

In both cases, you will get the picture other than we would have wished, the blurred photos. To prevent this from happening, the photographer have some techniques:

How to Avoid Blurred Photos : Using Proper Equipment and Accessories 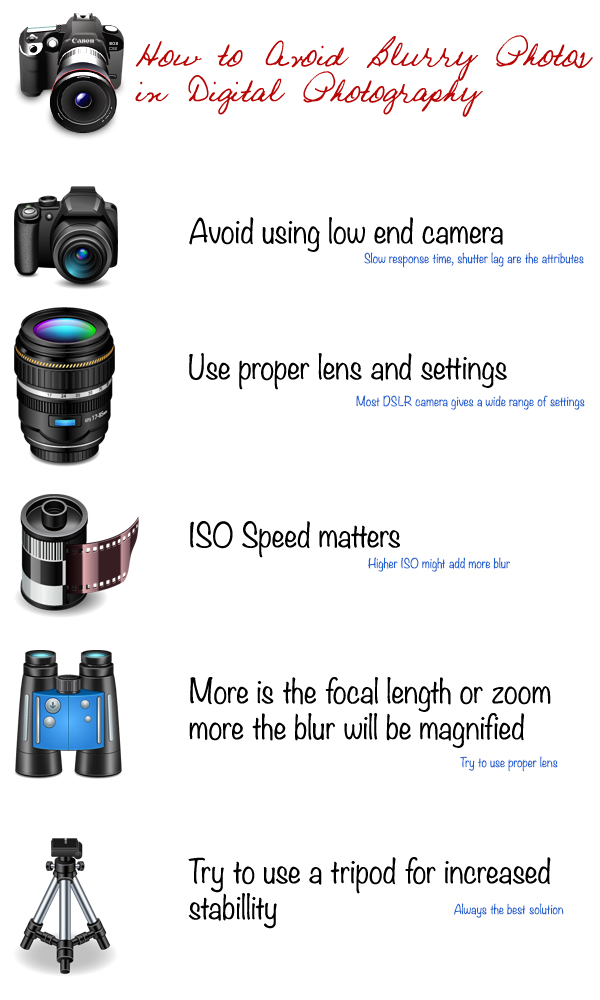 Equipment with the appropriate characteristics and choosing the right accessories can come in handy to the photographer – this is the key for how to avoid blurred photos.

All digital camera and lens manufacturers have some technique of image stabilization. Many compact digital cameras integrate technologies with different names with the common purpose of obtaining pictures does not work even in critical situations. Many lenses for digital SLR cameras integrated image stabilization systems (e.g. Nikon and Canon respectively labels with the initials VR and IS). Some manufacturers, eventually, additionally add a feature to DSLR that integrate stabilization in the camera body (for example, Olympus and Pentax). The differences between a lens with or without stabilization are felt especially when using focal lengths from 70 mm up. They are not a panacea, on many occasions we will need some accessories.

When the exposure times get really long, it becomes physically impossible to avoid blurred photos until the camera is held in the hand. Usually, lower the shutter speed to which it is said that a photographer is able to take pictures not moved by hand, is 1/60th of a second. Some photographers are able to go down to 1/30 of a second, but it is more rare.

As you can imagine, there are many occasions when it is necessary to use shutter speeds slower than those just mentioned. Not being able in these cases hand-held shooting makes it necessary to use a tripod. The tripod,is an accessory that you will certainly have seen on many occasions. Everything about Tripod and Tripod Heads has been discussed before :

The monopod is a support for the camera with one foot. It is practically an expandable baton. The monopod obviously provides less stability to the tripod, having a single point of support. There are situations in which a bit of additional stability is not bad, but in which a tripod can not be used or is not recommended, such as:

For landscape, usually tripod adds the risk to non-maintenance of the horizontal line as monopod gives the degree of freedom in X and Y axis in 3D space.

The tripods, especially those of better quality, can be rather cumbersome to carry around and even be unusable in certain situations. In some situations, even a monopod may not be convenient to carry. There is an accessory for these situations which is bean bag, its really bean bag literally. It is actually a bag of soft and mold-able material, small in size and so convenient to carry, on which you can rest the camera, getting proper horizontal orientation and stability even on uneven surfaces is far better even sometimes better than a monopod.

This Article Has Been Shared 458 Times!

Articles Related to How to Avoid Blurred Photos