Markdown is a simplified markup language, developed by John Gruber and Aaron Swartz in 2004. One goal of Markdown is that even the initial writing is easily readable in plain text format without further conversion. The markup elements therefore mainly used as labeling modes in plain text like for e-mails, documentations etc. Other markup languages ??with similar objectives for better readability are reStructuredText and Textile.

The Markdown conversion softwares converts the text into valid W3C compliant XHTML format. The reference implementation is in Perl under a BSD-style license. Further implementations are now used in the most popular programming languages ??such as C, PHP, Python or JavaScript. As a markup language, Markdown is also used in content management systems, usually some Plugins are used to extend the functions. 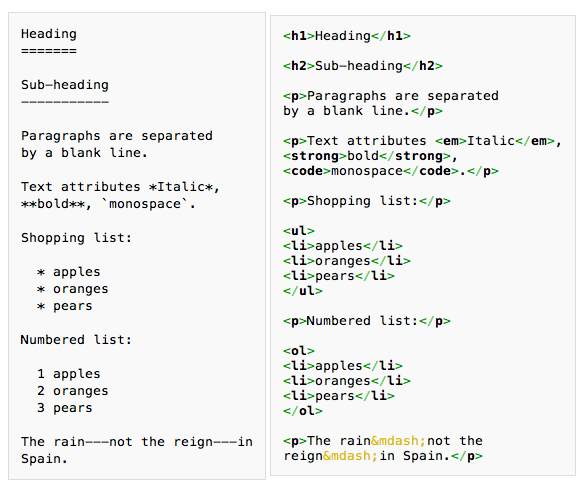 Markdown text mainly uses the punctuations and in some cases allows several equivalent methods. Characters are commonly understood as the format commands. For example, an asterisk (“is Asterisk “,” * “) at the beginning of the line interpreted as bullets, if you really want an asterisk, passing it with a backslash:” * ” will make it asterisk – the Markdown system will bypass it. Authors may, if necessary for more complex awards XHTML block elements use. These elements are used by the conversion software with no change in the target document. This makes it possible to format the document in ordinary XHTML. In late 2012, a standardization effort was started by a blog post of Jeff Atwood. Lot of websites, including Google+ supports Markdown, either partially or fully.

We wrote about a standalone self hosted Markdown Editor before. There are lot of other freely available softwares. Markdown requires Perl 5.6.0 or later. Markdown also requires the standard Perl library module Digest::MD5, which is probably already installed on most servers. Here is the Perl file :

To test just as example, you can copy in part and paste here on this online Tool :

As the Perl script has # , it will get formatted. Do not get confused – this is a funny example of plain text with Markdown Syntax to output. Coincidentally the copied text is the Perl file of Markdown itself.

WordPress Plugins : There are good number of Free Plugins for enabling Markdown, Mytory Markdown is one of such example.

This Article Has Been Shared 317 Times!