Advertisement
You are here: Home » Mirai Botnet : A Risk of Servers to IoT Devices
Advertisement

More and More Information Coming Out About Mirai Botnet. Mirai Botnet Was Risk of Servers and Also IoT Devices Including Some Consumer Grade Products. On October 21st 2016, Dyn was hit by a DDoS attack that created serious problems : the collapse of Dyn made unreachable for many hours the portals of the most notes from Silicon Valley (and more), from Amazon to Airbnb, PayPal, Twitter, Facebook just to mention a few. Since then the police and investigators have tried to track down the culprits. Mirai botnet used to bypass the defenses of thousands of surveillance cameras enlisted for the attack, was designed and made operational by three American twenties : Paras Jha, Josiah White and Dalton Norman. They have been in custody since January 2017 & confessed to be the architects of all the fraudulent operations connected to the botnet.

What Mirai Botnet Actually is?

The creation of the botnet began in early 2016 and was supervised by the three. Jha probably acted as an operator while the others were supporters. At first the botnet was used as DDoS Cannon, a tool that can be made to hit specific targets. The release of the Mirai source code, which took place at the end of September 2016, was designed by Jha as a precautionary measure to defend police if found malware on one their computers. The last months of 2016 the guys dedicated themselves in generating a high number of clicks with the bots from advertising world. 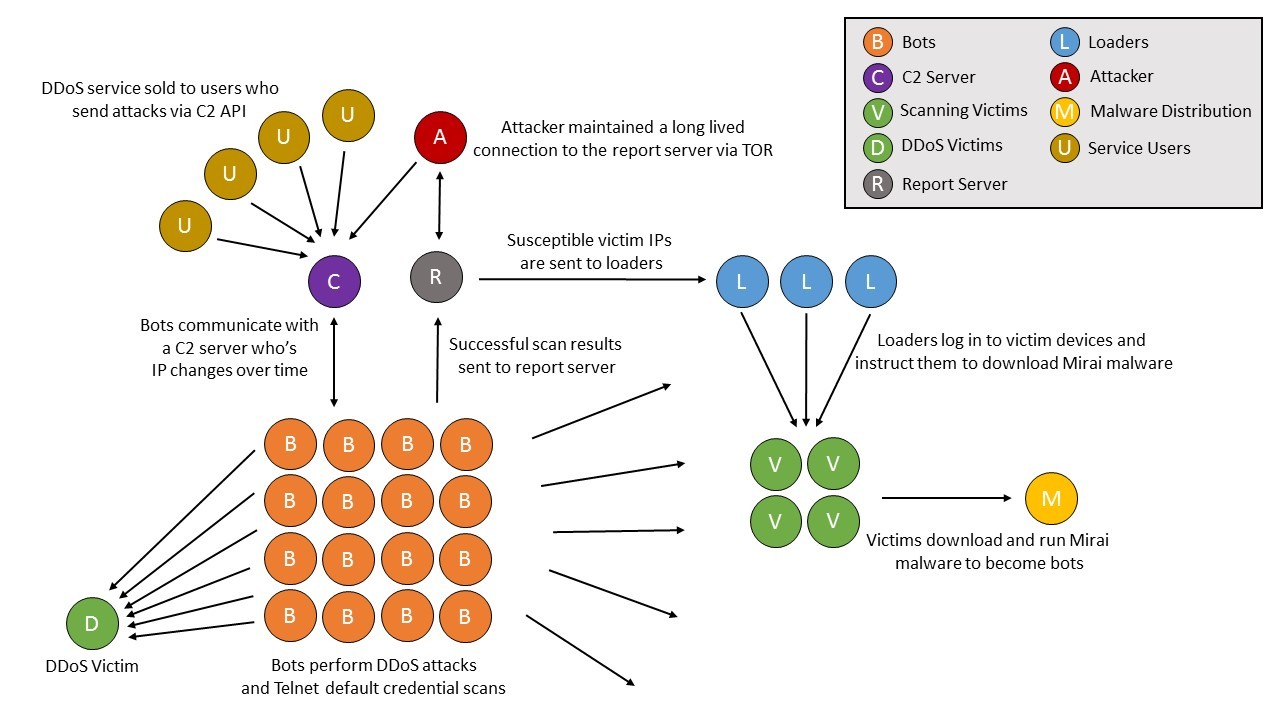 Devices infected by Mirai continuously scan the internet for the IP address of Internet of things (IoT) devices. Mirai includes a table of IP Address ranges that it will not infect. Mirai then identifies vulnerable IoT devices using a table of default usernames and passwords, and logs into them to infect them with the Mirai malware. There are thousands of IoT devices which use default settings which makes them vulnerable to infection.
Infected devices will continue to function normally, except being slight sluggishness and increased use of bandwidth. After a reboot, the device will be reinfected within minutes, identify other malware, remove them and block remote administration ports. Then the device will monitor a command and control server which indicates the target of an attack. Mirai as Internet of things (IoT) devices threat has not been stopped after the arrest of the three.

Google has released a PDF around Mirai :

Articles Related to Mirai Botnet : A Risk of Servers to IoT Devices