Predictive analytics tools are digging through data sets to show companies the golden path to the future. We have put together the best options for you. Over the past few decades, computers have shifted from filing cabinets for Data to technological crystal spheres that promise to predict the future by analyzing data. The tools that do this fall under the term Predictive Analytics and essentially perform two functions: (A) the analysis of databases to derive recommendations for action for the future (B) preparation of the analytical data, which in the rarest cases have the required consistency.

The later feature includes both uncomplicated tasks such as formatting unification, as well as the often time-consuming elimination of errors. Maintaining data integrity is often a real challenge. Sophisticated predictive analytics tools meet both requirements.

Technically, R is just an open-source programming language for data analysis that comes from much of the academic community. The built-in Tools R Studio, Radiant or Visual Studio are good in quality, but rather something for hardcore data scientists and programmers. If you are looking for up-to-date community ideas for experimentation, you will surely find what you are looking for here. Many of the tools listed in this article allow the integration of R-code in the form of modules.

Python is now one of the most popular programming languages – but also one of the most popular languages for data analysis in the field of science. Many research institutions use Python code to analyze their data. Data scientists have now bundled the data and analytical code into the Jupyter Notebook app. Python tools such as PyCharm, Spyder or IDLE bring new, innovative approaches into play, which often require some fine-tuning and are therefore primarily suitable for data scientists and software developers.

With its MATLAB solution, MathWorks originally wanted to support scientists in research with large amounts of data. In the meantime, however, MATLAB has mastered much more than just numerical analysis of data: the product line now focuses on optimizing statistical analyses, while the SIMULINK product group is used for simulation and modelling purposes. The company also offers special toolboxes for many individual markets, such as autonomous mobility or image processing.

IBM’s Predictive Analytics Toolset comes from two different branches: SPSS was founded in the 1960s and has become the foundation for many companies that wanted to optimize their production lines with the help of statistics. The punch card era has long since left the tool behind: Meanwhile, non-programmers can drag and drop data into a graphical user interface to generate detailed reporting. IBM had acquired SPSS in the summer of 2019 for about 1.2 billion dollars. Under the umbrella of the Watson brand, IBM is gathering another Analytics Toolset, which is constantly being expanded. Watson’s predictive analytics tools are largely based on iterative machine learning algorithms that can both train data and train data models. The tools can process numbers, images or unstructured text. 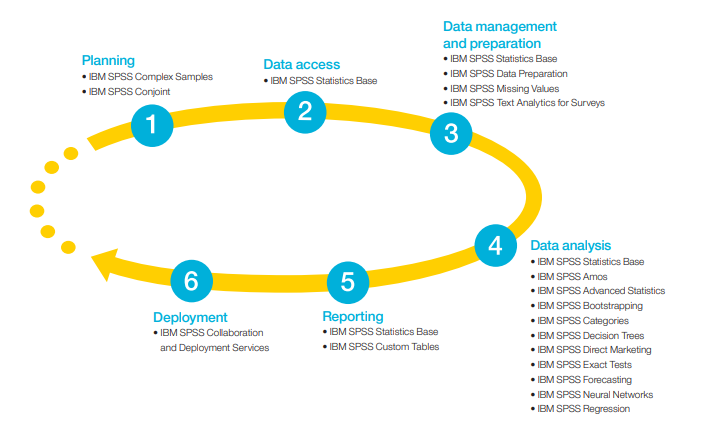 The AWS Toolset for examining data streams for signals or patterns continues to grow. The offers are traditionally separated by product line. For example, Amazon Forecast focuses on expanding economic time series to predict what sales are expected for the next quarter and how many resources will be needed to meet demand. Amazon Code Guru, on the other hand, looks for uncertainties within source code to improve operations.

Some AWS tools, such as Fraud Detector or Personalize, primarily support Amazon’s business itself – but are now being resold to other companies that want to create their e-commerce empire.

Tableau has made a name for itself with its almost artful processing of reporting information and was acquired by Salesforce last year. Dashboards can now be used in Tableau with the help of an embedded analytics model to interactively educate themselves about the results of data analysis.

Many companies rely on SAP to manage their supply chains. It is a good thing that the reporting tools now also support predictive analytics. For example, predictions can be made about machine learning models based on “old” data. AI capabilities also bring the software, which can run either locally on-premises or in the cloud. Specific user interfaces with cross-disciplinary consistency and the pronounced possibilities on mobile devices round off SAP’s predictive analytics package.

SAS’s Predictive Analytics Toolset bundles nearly two dozen different packages on a platform that turns data into both insights and predictions. The focus of the SAS toolset is on the analysis of unstructured texts.

Rapid Miner is designed to automatically create predictive data models without assistance in the shortest possible time. The developers also offer Jupyter notebooks with “automated selection” and “guided data preparation”. The available models are based on principles such as classic machine learning, Bayesian statistics or various forms of clustering. Explanations for the individual models indicate how exactly the models derive their results.

The Dash toolset comes in a free, open-source version and enterprise version and enables cloud-based management of predictive analytics models that are either already in use or are being developed. The open-source version brings Python libraries for data analysis and visualization, and the enterprise version comes with additional tools, such as Kubernetes, authentication, or the integration of GPUs in deployments for large user groups. The paid version also offers users more low-code extensions to create dashboards and other interfaces.

Companies that want to continue to rely on dashboards to visualize data trends in a summary way should take a closer look at Board’s offering. The tool makes it possible to tap a variety of data silos(ERP, SQL, etc.), analyze the information stored there and output the results in the form of a report that provides information about both the business past and the future (predictive). The focus is on summarizing data from as many sources as possible and “pressing” it into a standardized form, which can then be incorporated directly into visualization or predictive analytics.