Jupyter is a kind of acronym to mean Julia, Python, and R. Jupyter runs code in many programming languages and Python 3.3 or greater, or Python 2.7 need for installing the Jupyter Notebook. We can install Jupyter with PIP but using the Anaconda distribution to install Python and Jupyter is what is officially recommended. This article is how to install Jupyter Notebook tutorial as part 1 of the series. If you are not used with Anaconda, you need read our previous guide on how to install Anaconda on Ubuntu 16.04 LTS.

If you are Windows 10 user, then follow our Install Python, pip on Windows 10 From Bash guide.

For Anaconda, the command to install at present is :

We can easily install with PIP as alternative to Anaconda :

As for MacOSX, Pip is a package manager, virtualenv is an environment manager whereas Conda is both. It is practical to avoid Anaconda with Homebrew. For Mac, we often need to add sudo -H to work with Python. If you run :

You’ll get all the directories which will indicate the all possible versions of Python installed on your machine :

You can update all the installed packages :

Actually for Mac OS X you are installing Jupyter Notebook for Python 3 with this command :

Python is fucking complicated on Mac and NEVER uninstall any version without asking someone reliable on sites like StackExchange or Apple Community. There are hard coded reference of Python package with version number in Mac OS X binary.

Obviously the thing will get installed automatically, there is no big manual work behind it. To open :

Essentially it will open a tree, asking initially for a token which will be available on CLI : 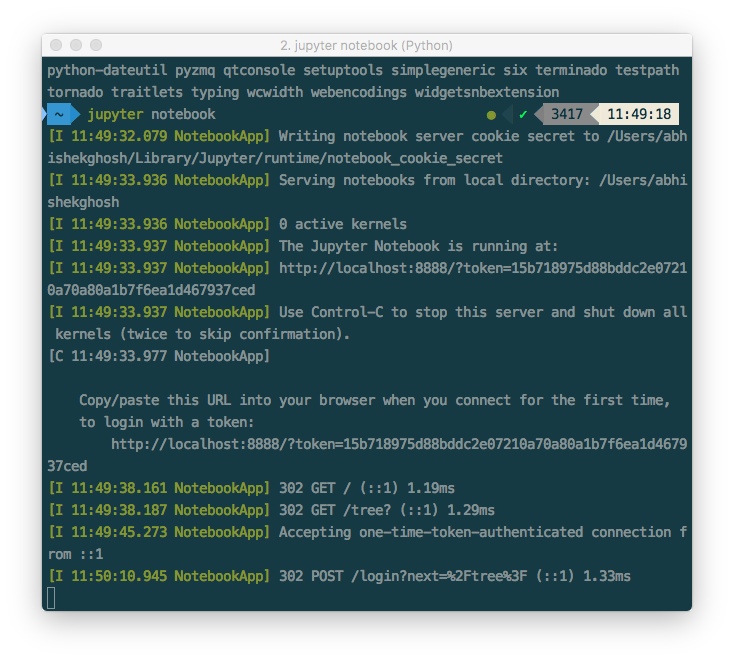 How To Jupyter Notebook Tutorial For Ubuntu 16.04 LTS or CentOS Server

With jupyter notebook --ip='*' we are forcing to listen on all interfaces.

This Article Has Been Shared 264 Times!