Conda is a binary package manager used by Anaconda and other systems of Python and R. Anaconda commonly used for data processing, scientific computing, predictive analytics by the data scientists, developers, analysts, and peoples working in DevOps. Anaconda has collection of over 700+ F/OSS packages. Conda is the CLI utility of Anaconda. Here is how to install Anaconda on Ubuntu 16.04. Here is official documentation of Anaconda (and conda) :

How To Install Anaconda on Ubuntu 16.04

SSH to your server and become root user. At the time of writing, the latest version is 4.4.0, you should use a later stable version if that is available while reading our guide. Change directory to the somewhere like /tmp and download the Anaconda for Python 3 bash script :

Now chmod the bash script and execute it :

You will get this output :

Accept the prompts. You’ll get option where it will be installed. You can change location to some location where you keep your scripts and files. By default, it will try to get installed at user’s home. At the end, you will receive prompts like : 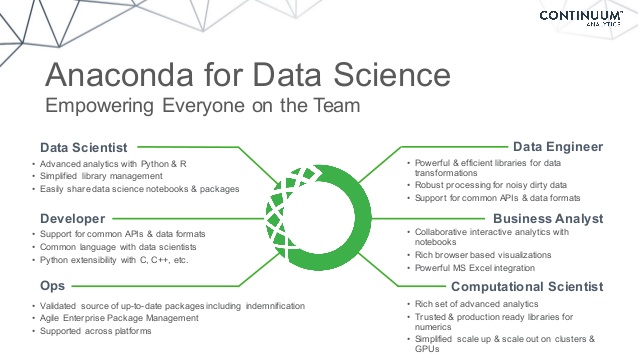 We can check to see which versions of Python are available by using this Anaconda :

We will create an example environment named tcw_env :

You can get rid of the environment by running :

You can check the other commonly used commands:

Articles Related to How To Install Anaconda on Ubuntu 16.04