Architecture is characterized by the existence of an explicit layer of business logic. This layer is intended to decouple the domain classes from other functions of the system and make them as easily recognizable as possible. Different architectural styles can be used to embed the business logic layer. These include layer architecture and hexagonal architecture.

Domain-driven design contrasts with the less complex Smart UI development pattern. When Smart UI is used, application logic is integrated directly into the user interface. This cannot create a dedicated layer for application logic that can be reused by various components. Domain-driven design is based on several concepts that should be taken into account in modelling, as well as other software development activities. The main focus here is on the introduction of a ubiquitous language, which should be used in all areas of software creation. A language for describing the professionalism, elements of the domain model, classes and methods, etc. Domain-driven design is itself independent of programming languages, tools and frameworks. However, some several tools and frameworks support the realization of specific DDD patterns or support DDD’s approach. 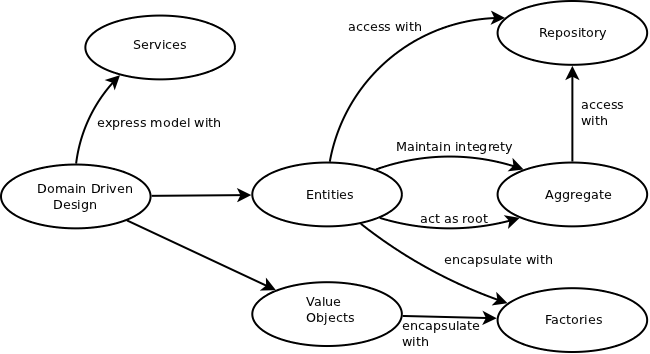 Domain-driven Design distinguishes the following components of the domain model:

The names of the business logic class corresponding to these patterns are part of the ubiquitous language and should be named accordingly. A change in the name of a specialist object by refactoring corresponds to a change in the technicality of the application.

Also, domain-driven design defines several procedures that serve to ensure the integrity of the models. This is especially necessary if several teams are to work together under different management and coordination on different technical skills, but in a large project.

Articles Related to What is Domain-Driven Design (DDD)?