An inertial navigation system (INS) is a 3-D measurement system with an inertial measurement unit as a central sensor unit with several accelerations and rotational rate sensors. By integrating the accelerations and rotation rates measured, the spatial movement and the respective geographical position is continuously determined. The main advantage is that it can be operated without reference, i.e. it is independent of any location signals from the environment. The disadvantage is the inevitable drift of the sensors. The term inertia navigation derives from the principle of mass inertia. The inertial measuring unit with its acceleration and rotation rate sensors calculates any change in position of the aircraft from the accelerations of the internal quantitatively known masses, also called seismic masses. Key challenges to the design are :

In practice, an INS is paired with other navigation systems that have a different error characteristic. For example, a combination with a global navigation satellite system (GNSS) provides absolute positional information at second intervals, while the INS interpolates the intermediate values, especially when signals are missing.

The starting point is the recording of the acceleration and the rotation rate using an inertial measuring unit. If the acceleration of a mass point in space is known in its amount and direction, one obtains its speed by integration over time and after further integration its position change caused by the speed s(t) caused by the speed. This is based on Newton’s 2nd Law of Mechanics.

Under known initial conditions—initial speed and starting point—the integration over time is followed by an absolute location after the sensor has been shifted. 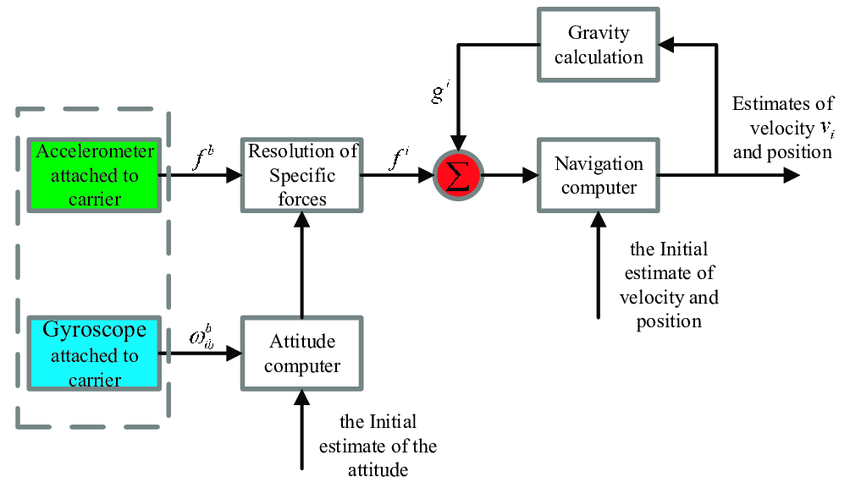 The same also applies to the angular velocity, which in turn can be transferred to the tilt angle in inertial space via simple integration overtime after determination using a rotational rate sensor. In total, an INS performs the simultaneous measurement of six sizes, namely acceleration and angular velocity, each in the three orthogonal spatial directions. For this purpose, accelerometers are used for the three translational degrees of freedom as well as for the three rotary rotational rate sensors, each installed in the INS housing according to their sensitive axis. Due to the sensor drift, which is stronger than the falling price, the use of an INS is affected by a measurement error, which increases squarely with the advancing measuring time due to the double integration of the position determination or even enters into the position error with a third power in an angle calculation. In addition to the actual useful signals when used on Earth, influences of gravitational acceleration, as well as the earth rotation, are also measured and thus have to be observed as interference signals.

Acceleration can be measured on the one hand using vehicle-resistant accelerometers (“strap-down”) and on the other hand by gyro-stabilized accelerometers, which have a stable plane and direction in space or concerning the tangential plane. Utilizing the gyro technology, the rotation of the earth around the sun (0.041 °/h), as well as the earth rotation (15 °/h), must be measured or compensated.

Articles Related to What is Inertial Navigation System?