On-board diagnostics (OBD) is a vehicle diagnostic system. During driving, all exhaust-influencing systems are monitored, in addition to other important control units whose data is accessible through their software. Any errors that occur are displayed to the driver via an indicator light and permanently stored in the respective control unit. Error messages can then be queried later via standardized interfaces. Initially, the data was collected and evaluated according to different principles of the various manufacturers, sometimes even from model to model in a modified form. In retrospect, this phase is now referred to as OBD-1 (also OBD I), while after standardization one speaks of OBD-2 (also OBD II). Since OBD-2, the error codes (DTC – Diagnostic Trouble Code) are also called P0 codes, specified in the standard SAE J2012 or ISO standard 15031-6.

As early as August 1965, Volkswagen began to equip the produced vehicles with a central socket, which could be connected to a punch card-controlled computer system via a diagnostic plug. The purpose of the facility was automated diagnostics in workshops, the exhaust gas diagnosis was not yet part of the examination program at that time.

OBD systems for exhaust diagnostics were introduced in the United States in 1988 by the California Air Resources Board (CARB). General Motors had developed the ALDL standard, which was also found in vehicles of the then subsidiary Opel. The basis was the consideration that it is not sufficient to comply with the exhaust gas regulations during approval, but that compliance should be ensured over the service life. The OBD-I standard stipulates that the vehicle has its electronic systems for self-monitoring. These must indicate emission-relevant faults via a signal lamp integrated with the fittings – the so-called engine indicator light (MIL = “Malfunction Indicator Light”). In addition, errors must be stored in a memory that can be read with onboard resources (flashing code).

Recent regulations also called for monitoring of the monitoring function. The basis is the fear that the diagnoses will not be carried out regularly over the lifetime. Therefore, it is necessary to record how often the diagnoses are carried out and certain quotas are given. The results can be read out via a standardized connector via a serial interface with standardized protocol or via the CAN bus.

In addition to the originally envisaged environmentally relevant area of exhaust gas monitoring, further areas of vehicle diagnostics were successively added. Safety-relevant areas such as belt systems and airbags, faults such as short circuits and line interruptions, problems with possible engine damage, as a result, maintenance instructions such as oil level, etc. are now also integrated into the OBD.

In the OBD-3, it is also to be transmitted by radio to an authority if a vehicle does not comply with the exhaust emission limits for a longer period. In the European Union, the regulation stipulates that an engine indicator light is part of the OBD when a vehicle is newly registered. This applies to passenger cars with gasoline engines from the year 2001 and to passenger cars with diesel engines from the year 2004. However, vehicle models for export to the USA, in particular, are also OBD 2 capable in much older years of construction.

Each request to the ECU consists of a mode and a data set (parameter ID, PID) of this mode. PIDs have been standardized in certain areas since OBD-2.

Not all exhaust-relevant components can be permanently monitored because (for example, in the case of the catalytic converter) certain operating states must first be achieved. Based on the readiness code, a commercially available scan tool can be used to read out whether all exhaust-relevant components or devices have been tested by the OBD. The readiness code is read out and evaluated during the examination of the engine management and exhaust gas purification system UMA.

A range of hand-held scan tools is available. Data loggers with the possibility to read out the data later on PC via USB are also available.

The results of the onboard diagnostics can also be read out by special software applications on commercially available notebooks. Via the diagnostic interface, the connected workshop or notebook computer (via additional hardware required for protocol interpretation and signal level conversion) sends commands to one of the ECUs, which is activated via its address, and then receives results back. Commands are available for reading the ID (precise model name and version) of the ECU, for reading and resetting the error entries mentioned above, for reading out so-called measured value blocks (also called standard display), for reading, testing and setting various setting parameters (so-called adjustment channels) and (especially for the development) for direct reading and writing memory cells in the ECU. For smartphones, apps are available that enable wireless reading and evaluation of the OBD interface with a corresponding Bluetooth adapter. 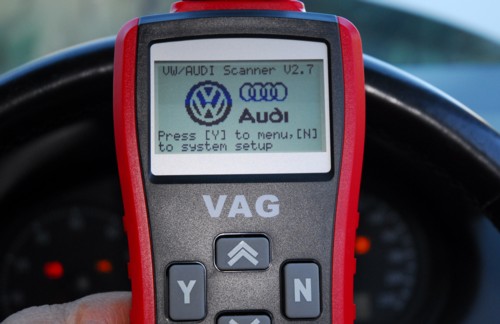 Other benefits of OBD

In addition to averting danger and protecting the environment, the OBD is also intended to prevent engine damage in practice: in the event of corresponding errors, engine-friendly emergency running programs are then activated. For example, after detecting a loose spark plug cable (“cable break”), the corresponding cylinder is switched off (no fuel injected), otherwise, the unburned mixture could destroy the catalyst. The driver perceives this (in addition to the possibly flashing MIL) as a drop in performance.

Furthermore, the OBD can also be used to simplify maintenance and repairs. This can search the defective component easier or even superfluous after the occurrence of an error symptom. However, the prerequisite for this is that correspondingly detailed service documentation of the manufacturer is provided for the respective error messages. A diagnosis is also a valuable tool during the development phase of ECUs.

The OBD interface can not only be used to read out data but also to send general commands to the vehicle. By connecting, for example, to a notebook with appropriate software, outside the manufacturer-independent, exhaust-relevant OBD-2 diagnostic protocol, manufacturer-specific communication protocols in some vehicle models, for example, can bypass the electronic immobilizer and move the vehicle unlawfully. Consumer advocates criticize that especially with older used cars via the OBD-2 interface, the speedometer reading of the odometer can also be manipulated.

Articles Related to What is On-Board Diagnostics (OBD)?